Traditionally, the people of Pakistan and Turkey enjoy brotherly relations that can be traced back to even before the formation of modern Turkey, Republic of Turkey in 1923 and Islamic republic of Pakistan in 1947. Turkish Prime Minister Recep Tayyip Erdogan’s reciprocal visit after Chief Minister Punjab Shahbaz Sharif’s visit to Turkey following the Prime Minister Nawaz Sharif’s visit in September 2013 highlights the significance of relations between the two states.

The two states pledged to intensify cooperation in energy, trade, urban development, infrastructure and housing sector. To enhance trade both states decided to conclude a Preferential Trade Agreement (PTA) by the first half of 2014. PTA is actually a trade pact between signatories of the agreement to reduce tariffs for certain products. It does not eliminate the tariffs but lowers them and may lead to Free Trade Agreement (FTA). The trade volume between Pakistan and Turkey is less than the actual trade potential of two states. The signing of PTA would help to increase the trade level.

A rapid urbanization process is undergoing in Pakistan but mismanagement has converted this process into liability. Given the increased urbanization and to meet the challenge of growing population, Pakistan can learn from Turkish experience of low cost housing project that provides houses to low income families at affordable prices. Under this project Turkey’s slum areas have been developed into beautiful residential schemes. Earlier, Prime Minister Sharif had meetings with delegates from Turkish housing society and showed interest in this scheme, he desired to convert swathes of land lying idle on the suburbs of major cities into low cost housing units. It was also decided that the houses built under this scheme will be given to low income people on subsidized rates and to the middle income people at the actual cost.

Leadership of both states desire to transform political relationship into durable economic and trade relations. We have examples of successful completion of projects by Turkish companies like Metro Bus System and Solid Waste Management Project in Lahore, a wind energy project by Zorlu Energy in Sindh. Turkey’s contribution in reconstruction and rehabilitation projects in Pakistan’s earthquake and flood affected areas are also examples of successful collaboration between the two states.  Pakistan’s government has been trying to reassure the foreign investors that Pakistan is an investor friendly state that offers complete legal protection to investors.

A part from trade and investment, Pakistani Prime Minister during his visit to Turkey had also sought Turkish help to eradicate extremism and radicalism and expressed hope that Turkish cooperation would enable Pakistan to implement counter-terrorism strategy. Seeking foreign help to eradicate terrorism and radicalism is important but extremism could not be rooted out with the use of force alone but social reformation and education are equally important for this end. Pakistan has to learn a lot from Turkey that has passed through the phased social reforms process have contributed much in raising the living standard of the people.

As far Pakistan is concerned, social reforms and education are the most neglected fields; education is treated as the lowest priority in government policies and at societal level as well. Economic problems, poverty, and over-population have engulfed the society.  Social reformation process is as important as getting education or perhaps more important than education because it deals with changing dynamics and growing dissatisfaction and insecurities in society. Extremism is the menace that threatens the whole society and challenges the norms and values that takes years to transform any particular society. The Afghan conflict and its spillover effects on Pakistan have contributed to the rise of extremist forces in Pakistan. Apart from dealing with the causes of homegrown extremism, Pakistan has to deal with the negative impact of Afghan conflict on its society.

The stability in Afghanistan is another issue where Pakistan and Turkey can work together. Given Afghanistan’s pivotal role in enhancing economic regional integration, Turkey had launched a trilateral summit process in 2007, involving Afghanistan-Pakistan-Turkey with the objective to promote peace, stability, and socio-economic development in Afghanistan.  This trilateral initiative has been transformed into institutional mechanism for cooperation in diverse fields. Keeping in view troubled Pak-Afghan relations that are characterized by mistrust, Turkey can help Pakistan in engaging Afghan government to facilitate the reconciliation process in Afghanistan, and to deal with post withdrawal 2014 challenges.

Pakistan needs to enhance cooperation with other states, signing of pacts and agreements is important but Pakistan also requires to bring transparency in formulating and implementing government policies  and to bring institutional harmony among different pillars of state so that foreign companies do not hesitate to invest in Pakistan.

The article was carried by Daily Times on January 5, 2013. The views expressed in the article belongs to the author and do not reflect  the policy of the institute. 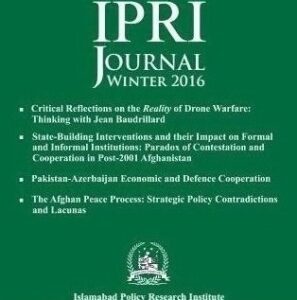 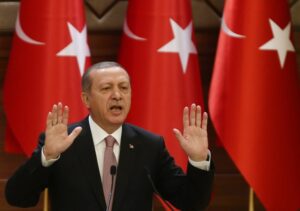 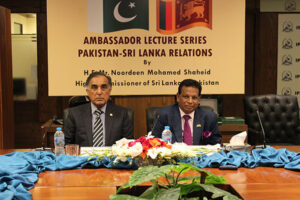