The Nawaz-Rouhani summit was long overdue; preceding high profile visits between Saudi Arabia and Pakistan had caused unease in Iran despite Pakistan’s assurances that it wishes for a balanced relationship with both countries.

The Iran-Pakistan summit was on hold for the last couple of months due to a few untoward spontaneous irritants. Despite immense preparatory work, the leadership met in an environment weighed down by an information gap, mistrust, confusion and misperceptions. Kidnapping of five Iranian soldiers by militants in February, positional gap in the way of implementing the IP gas pipeline, illegal emigrants/immigrants issue and Tehran’s overarching discomfort regarding Pakistan’s enhanced contacts with the Saudi leadership were good enough reasons to scuttle the launch of any meaningful initiative to strengthen Pakistan-Iran relations. However, apparently, the two sides have been able to find a way forward despite a difficult strategic environment, much of which is not of either’s making. Now, the stalemate is over.
A day after the summit, Saudi Foreign Minister Prince Saud Al Faisal extended an invitation to Iranian Foreign Minister Mohammad Javad Zarif to visit Saudi Arabia, expressing Kingdom’s readiness for negotiations with Iran. Addressing a press conference on the eve of “Arab Economic and Cooperation Forum with Central Asia and Azerbaijan”, Prince Saud pointed out that ongoing political crises in the Middle East have given major superpowers the opportunity to meddle in the internal affairs of other countries, which increases the phenomenon of terrorism.
Over the years, Pakistan has been trying to narrow the differences between these two friendly countries; however, it will be an overstatement to attribute the Saudi invitation to Iran entirely to the Iran-Pakistan summit. 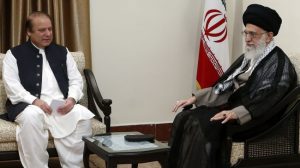 Saudi invitation is reflective of the Kingdom’s serious concerns about the currents and counter-currents decimating the potential of the Muslim Ummah. Hopefully, Iran will respond positively to the offer as it is of utmost importance for the stability of the region that these two very important Muslim countries negotiate, institutionalize and regularize their bilateral engagements through joint commissions and interaction/partnership between their think tanks. Saudi Arabia should take visible and convincing steps to indicate that it has abandoned the role of American proxy against Iran; likewise, Iran should demonstrate that it has given up the mission of agitating “Shiite” population of Gulf countries to upset the status quo in the Middle East.
Both countries should realize that the international situation has changed and the super powers are no longer concerned about the sovereignty and independence of less powerful states; all their acts and policies are self-serving. A new approach in the international arena seeks to alter the status quo of countries from the inside— and when such efforts fail, they intervene externally. This is being witnessed in several Islamic countries, which are facing internal fighting while the international players are weakening them for the attainment of their long term objectives. Concerns of Muslim countries can only be resolved through their inter and intra-state negotiations, aimed at strengthening each state’s internal consolidation, and respecting each other’s sovereignty.
On the heels of the Saudi foreign minister’s invitation to his Iranian counterpart was the theme of the US Defense Secretary Chuck Hagel’s remarks at the “US-Gulf Cooperation Council Defense Ministerial Conference”: “I hope [this meeting] becomes an annual security consultation, and the backbone for renewed cooperation among all the nations of the GCC,” he said. He assured that the United States is determined to support the Gulf countries: “This has been demonstrated by the United States Central Command’s continued forward military presence, which includes 35,000 personnel; our Navy’s 5th Fleet; our most advanced fighter aircraft; our most sophisticated intelligence, surveillance, and reconnaissance assets; and a wide array of missile defense capabilities…It has also been demonstrated by recent defense sales agreements, including some of the largest in American history.”

Talking about resumption of nuclear discussions with Iran in Vienna, Hagel noted: “We got to Vienna thanks to our collective efforts to isolate Iran diplomatically and economically, and to deter it militarily.” As negotiations in Vienna progress, he said, two things should be clear: “First, these negotiations will under no circumstances trade away regional security for concessions on Iran’s nuclear programmme;” and, “Second, while our strong preference is for a diplomatic solution, the United States will remain postured and prepared to ensure that Iran does not acquire a nuclear weapon — and that Iran abides by the terms of any potential agreement.” 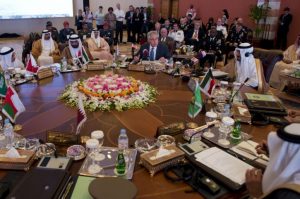 Hagel made proposals in several areas: designating the Gulf Coordination Council’s Air and Air Defense Chiefs Conference as the GCC’s primary military forum for regional air and missile defense policy; GCC to assume and maintain command of the Combined Maritime Force’s Gulf operations, Combined Task Force 152, and to commit to a regular heads-of-navy conference; establishment of a US-GCC cyber defense cooperation initiative to jump-start collaboration; GCC to develop a Foreign Military Sales case, which could “advance regional defense priorities by accelerating the GCC’s progress toward greater interoperability and more sophisticated multinational force development; publicly declare shared resolve, goals, and vision for stronger US-GCC multilateral defense coordination; demonstrate unity at a critical time; send a message of strength to adversaries.
Iran views GCC as a Saudi led American bulwark to counter Iran. The most pressing security challenges threaten the whole region and demand a collective response, which has to be Iran inclusive. At the same time, Washington’s rapprochement with Tehran has created mistrust among the Gulf states, which feel isolated and uncertain of their trusted ally’s support and position on key issues and challenges posed by Iran that are perceived as a direct threat to their national interests. Despite Hagel’s articulations, the GCC’s mistrust of the US is likely to persist.
The Ummah has suffered a lot because of foreign inspired wars including the Iran-Iraq conflict and tensions between other States. Ongoing developments in the Middle East are creating fissures within the region which could have serious effects beyond the region. As major Muslim countries enjoying a lot of clout over a large number of Muslim states, Iran and Saudi Arabia should stop competing for winning American favour and avoid giving an impression of ganging-up against each other. Both countries need to set the parameters for using their influence for the good of the Ummah, which will in turn come back to strengthen their respective clout.
Pakistan has reiterated time and again that any improvement in relations with Tehran will not be at Saudi Arabia’s expense and vice versa. However, it is not an easy task convincing these two states. Ensuring a delicate balance in relations with Tehran and Riyadh is one of the key issues being debated amongst the managers of foreign policy. Pakistan needs to move forward and work with Iran for bringing stability in Afghanistan. There are a lot of positives that can come about if Pakistan plays its cards well towards balancing the regional political scenario. Pakistan should also play a more proactive role in mediating between Iran and the Gulf states—especially Saudi Arabia.

Disclaimer: Views expressed are of the write,r and are not necessarily reflective of IPRI Policy. 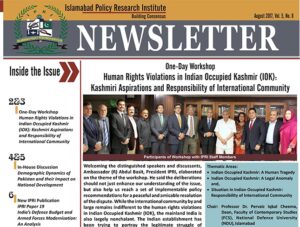