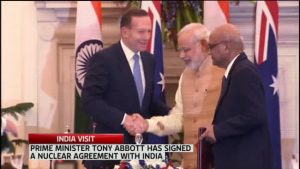 Australia-India uranium deal is a marked shift to the Australian principled policy of supplying uranium to Nuclear Non-Proliferation Treaty (NPT) signatory countries. India despite being a non-NPT state would be the recipient of Australian uranium. Initially, Indian request for uranium sale was refused by Australia, on grounds of non-NPT status. There existed division within the political community in Australia – the Liberals supported the uranium sale, while the Labour government opposed the sale. However, later, the political opposition to the deal pacified. Negotiations for the sale of uranium to India began in 2006 and an agreement was reached in 2014. Australia’s decision to overturn the ban on sale of uranium to India was after the India-US civil nuclear agreement (signed in 2008). Under the agreement, nuclear sanctions against India were lifted, allowing it to buy reactors and fuel from overseas.

India, a non-NPT country now has an access to Australian uranium. The possibility that India would not use uranium for nuclear weapons cannot be ruled out. In the past, India had diverted the Canadian-supplied fuel for research and power generation to making of nuclear weapons. Moreover, Indians have reportedly been involved in supplying technology to Iran to develop weapons of mass destruction.

According to the World Nuclear Association, India currently has 21 operating reactors (a capacity of 4,780 megawatts). The country plans to increase its nuclear capacity to 63,000 megawatts by 2032. The nine Nuclear Supplier Group (NSG) member states that currently have a civil-nuclear deal with India include Australia, the US, Canada, Russia, France, Argentina, Kazakhstan, South Korea and the UK.

Australia, home to about 40 percent of the world’s uranium reserves is the third producer of the nuclear fuel (after Kazakhstan and Canada). Currently, Australia supplies uranium to Japan, China, South Korea, Spain, France, UK, Sweden, Germany, Belgium, Finland and the US. Seeing the deal in the economic perspective, the bilateral trade between Australia and India stands at a US $ 15 billion. The members of the business community in Australia who have developed economic links with India, would like that the two countries should get tied in a more sustainable bilateral relationship. The uranium deal with India would increase export revenue by US $ 1.27 billion dollars. Seeing the deal in the geo-political terms, both Australia and India are strategic allies of the US. The Cold War era, during which, Australia and India were proponents of opposite blocs is over. Australia, an Asia Pacific power wants to enhance its area of influence in other important regions of the world. India could be a partner to achieve strategic reach within South Asia. Meanwhile, in view of India’s growing politico-economic interests in East Asia (Look East/Act East policy), it wants to reinforce ties with the regional states.

The commencement of Australia-India nuclear trade though a bilateral agreement has global as well as regional repercussions. The deal (an unprecedented agreement), has entitled a non-NPT state to purchase nuclear fuel. The international proliferation standards have been conveniently sidelined. The geo-political and geo-economic benefits associated with the deal have outweighed the commitments to non-proliferation regimes.

The special treatment offered to India will boost nuclear arms race, new nuclear power states will emerge, and an end to non-proliferation regimes. India’s acquisition of uranium could prove to be detrimental for regional peace. India holds the repute of a regional hegemon, war mongeror, violator of treaties/resolutions and initiator of nuclear arms race in the region. It may aggravate the India-Pakistan nuclear rivalry. The Indian Cold Start Doctrine (CSD), nuclear submarines, development of Inter-Continental Ballistic Missiles (ICBM), Ballistic Missile Defence (BMD) and the second strike capability are reflective of India’s aggressive nuclear posture. Pakistan’s pursuit of full spectrum deterrence is essential to counter these strategic endeavours and to sustain deterrence. 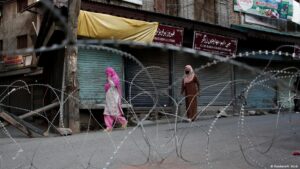 India has wronged Kashmir, only it can rectify it 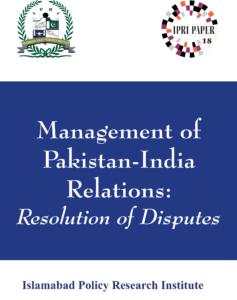 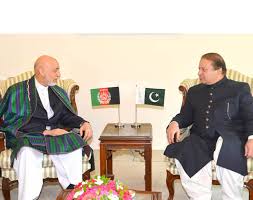