Indian Prime Minister Narendra Modi’s short stopover in Lahore on December 25, 2015 and Pakistani Prime Minister Nawaz Sharif’s warm welcome may be taken as a “good-will gesture” or positive signs in future Pakistan-India relations. The dominant narrative is that the thawing of relations between Pakistan and India could be traced back to a chance 167-second November 30, 2015 meeting between Modi and Sharif on the sidelines of the “Paris Climate Change Conference”. This supposedly led to a December 6, 2015 meeting in Bangkok, Thailand, between Pakistan’s national security advisor, Lieutenant General (R) Nasir Khan Janjua and his Indian counterpart Ajit Doval. The conclusion of these meetings made it possible for India to send its External Affairs Minister Sushma Swaraj to Islamabad to attend the latest session of the multilateral “Heart of Asia-Istanbul Process” on December 8, 2015, which culminated in vowing to start “Comprehensive Bilateral Dialogue” between Pakistan and India.

But there is a need to analyse factors, both internal and external, that possibly had played a role in Modi’s surprise visit to Pakistan, which seemed unlikely for a party like the Bharatiya Janata Party (BJP) with Modi as Prime Minister. In fact, Modi’s visit was a move, aimed at placating Washington and other influential states so that Pakistan could focus on operation “Zarb-e-Azb” coupled with shoring up the increasingly embattled Modi government domestically. The visit coincided with Nawaz Sharif’s birthday and the wedding of his granddaughter. The two heads of government also had an unscheduled meeting at the Paris climate change talks earlier last month (December 2015). In Pakistan, the visit was taken positively as analysts viewed the visit as a turning point in Pakistani-Indian relations. However, Modi faced criticism from the main Indian opposition Congress Party and the electronic media in the country. Members of the Congress party termed it personal diplomacy of Modi, which lacked gravitas. Mirwaiz Umar Farooq, a key Kashmiri leader in the Indian-held Kashmir, said that it was a welcome step. People in Kashmir hoped that it will be followed by a consistent policy of engagement to resolve the Kashmir dispute. But the question remains whether India, especially under Modi will even decide to talk to Pakistan on Kashmir issue. To pressurize Modi government to talk on Kashmir, apart from maintaining good relations with All Parties Hurriyat Conference (APHC), Pakistan should also develop contacts with Omar Abdullah and Mehbooba Mufti Sayeed, who recently have been vocal against Modi-styled government and BJP’s policies of abrogating article 370 of the Indian Constitution, that gives Indian-held Kashmir (IHK) special powers, and excesses committed by the RSS against Indian Muslims recently.

Previously, in May 2014 Nawaz Sharif had attended Modi’s swearing in ceremony as Prime Minister in spite of many reservations Pakistan had with India. But soon after, Modi government cancelled Secretary level dialogue, which was scheduled on August 25, 2014. This was followed by Line of Control (LOC) and working boundary violations by the Indian Army during first six months of Modi’s government. This clearly exposed BJP’s designs about Pakistan. As already mentioned, there may be two factors, i.e. internal and external behind Modi’s decision to visit Pakistan. Modi won Maharashtra, Haryana, Jharkhand, and Jammu & Kashmir provincial elections not only due to anti-Pakistan policies. Modi forgot that people had voted for him for the promises he had made on economic issues. Modi had failed to deliver to the people in the economic field and hence the BJP lost Delhi elections in February 2015, when out of 70 seats the regional party called “Aam Admi Party” won 67 seats. Later, the BJP also lost elections in Bihar province in November 2015. But even then Modi could not understand the mood of the people and continued his anti-Muslim policies at home and anti-Pakistan policies abroad. Meanwhile, in April 2016, provincial elections are going to be held in Assam, West Bengal, Kerala, Tamil Nadu, and Pandi Chari where a substantial number of Muslim population can be a deciding factor in the results of these constituencies. So, being softer on Pakistan probably meant getting the support of Muslim voters for the BJP.

The external factors include the pressure on the Modi government from the US, Russia, China, UN and major European countries, especially after the Paris attacks. In view of Pakistan’s successes in fighting war on terror, these states want India to have friendly relations with Pakistan, and not to come in the way of Pakistan’s ongoing resolve and efforts in operation “Zarb-e-Azb”. But this change in Modi’s policy is more likely to be reversed once the upcoming elections in the five states in April 2016 are over. In view of the experience of the past talks with India, there is very little we could expect from Modi in the future as far as relations with Pakistan are concerned. Obviously, no substantial outcome of bilateral talks could be expected in this post-visit scenario except that bilateral talks may be continued by India in the form of a peace process just to satisfy major powers and some domestic critics of Modi. In this context, Pakistan should continue to make efforts through bilateral talks to resolve some disputes, without expecting any major gains. In the meantime, Pakistan must utilize all its energies on economic development through early completion of “China-Pakistan Economic Corridor” (CPEC) and should improve its domestic security situation by successfully completing the last phase of operation “Zarb-e-Azb”. 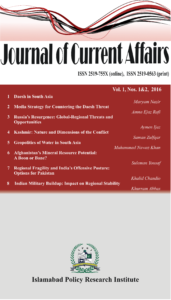