PAKISTAN and China have kicked off their first trade activity under the China-Pakistan Economic Corridor project as over a hundred Chinese containers arrived at the Sust post, which is a village in Hunza, from where they will leave for their final destination i.e. Gwadar. In regard of this activity, an inaugural ceremony was also held, which was attended by Chinese officials as well as Gilgit-Baltistan Chief Minister Hafeez-ur-Rehman and the Force Commander of Gilgit-Baltistan, Saqib Mahmud Malik.
While addressing the inaugural ceremony, GB Chief Minister, Hafeez-ur-Rehman said that under the CPEC the fate of GB would change, adding that one thousand Chinese containers would pass through the Karakoram highway in Gilgit-Baltistan every week. It was also stated that the federal government has approved projects to provide GB with modern technology. To enhance connectivity, the Shuntar pass, Babusar road and Gilgit-Skardu road would also be constructed under the CPEC framework. As per the stated objectives of CPEC, the benefits that Gilgit-Baltistan would reap out of CPEC project are believed to be a fraction of a consolidated remuneration, Pakistan and whole region would get.
CPEC as part of China‘s OBOR initiative, is expected to open up new vistas of opportunity for trade, infrastructure, investment, capital and regional connectivity. CPEC has plans to develop a new trade and transport route from Kashgar in China to the Gawadar Port besides establishment of special economic and industrial zones along the routes which includes energy projects as well. Industrial and special economic zones (SEZs) are considered to be economic backbone in the structure of CPEC, serving the macro and micro dimensions of economy. Pakistan needs a more developed industry to lay solid ground for its economic takeoff, providing a golden opportunity to accelerate the process of high level industrialization. Once fully developed, Gwadar port and allied facilities can provide Pakistan with estimated annual revenue of US $40 billion, besides generating two million jobs.
With greater economic value, CPEC provides an opportunity to all regional states to make South Asia a seamless integrated region. However, the divergent and conflicting interests of some regional and extra-regional states are a threat to the construction and success of CPEC. India has raised multiple objections regarding CPEC, linking territorial disputes and concerns of regional security and stability with it.
Moreover, it is believed and rightly so that India has been sponsoring terrorist activities in Pakistan to sabotage the development of CPEC. The case of Kulbhushan Yadav is a case in point. Kulbhushan Yadav, an Indian spy, has admitted that he had been tasked to carry our destructive activities inside Pakistan. Moreover, On India’s 69th Independence Day, Narendra Modi, in his address to the nation, admitted to supporting various insurgent and separatist groups inside Pakistan. Moreover, Modi’s government has also termed CPEC and related developments as unacceptable and has conveyed their grievances to Chinese officials in specific meetings. Such behavior clearly explains the Indian ambitions of sabotaging a development aimed to bring regional prosperity. Besides, it’s a pity that world at large remains ignorant to Modi’s outrageous conspiracies against Pakistan, which are in total contrast to ambitions of regional integration.
Pakistan wants peaceful and economically progressing Afghanistan in its neighborhood but the suspected RAW-NDS nexus and exploitation of internal instability in Afghanistan could be detrimental to the regional economic integration. In an effort to link Afghanistan with CPEC, Pakistan has already pledged for the construction of motorways that would link Afghanistan to the port facilities as an opening for economic and commercial activities. However, such plans of disruption could have possible ramifications for CPEC which may include efforts to spread chaos in an attempt to impede the economic activities of CPEC. Further, the baseless claims of India regarding the routes of CPEC and subversive efforts to sabotage the developments could heavily impact the issues of regional connectivity.
Pakistan should explore and capitalise on all opportunities for an economic revival. CPEC will strengthen the bilateral relationship between China and Pakistan. Pakistan can only achieve the best through CPEC with a better realisation of its national interests. In order to reap the fruits of this mega deal with China, Pakistan needs to focus on its own economy including various industrial and trade sectors so that the corridor will be utilised in the best possible way. CPEC is a national undertaking and it requires a collective effort to thwart any designs aiming at disruption and destruction. CPEC is destined to bring significant improvement in the lives of hundreds of millions of people, besides further promoting mutual interdependence among regional states. 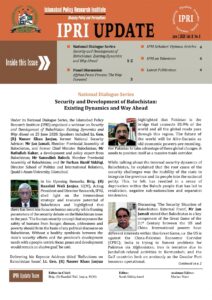