With the collapse of talks in Afghanistan, peace once again has become a distant thought. The cancellation of talks is a strange development in itself, given that the US representative and the Taliban had the last round of talks on September 2, and it was reported that a peace agreement had been finalised ‘in principle’.

Citing an attack in Kabul, President Donald Trump had called off the talks at Camp David in which he was supposed to meet the Taliban leadership and President Ashraf Ghani, separately. On September 7, President Trump tweeted: “What kind of people would kill so many in order to seemingly strengthen their bargaining position? If they cannot agree to a ceasefire during these very important peace talks, and would even kill 12 innocent people, then they probably don’t have the power to negotiate a meaningful agreement anyway. How many more decades are they willing to fight?” Violence is leverage for the Taliban, and they have been attacking people and the state infrastructure since the very beginning of negotiations (projected progressing at various instances) or even before that. However, it did take Washington a while to analyse and call off talks at such a critical point. Meanwhile, the cancellation of talks has been viewed as a mere repetition and need-based policy exercised by the US; many in Afghanistan have welcomed this step. It is believed that while the US, as seen, was in a haste to leave Afghanistan, any deal brokered would be equal to selling the people of Afghanistan to violence, given a ceasefire has never been agreed upon.

A perception exists that Taliban’s policy of continued violence is a power show. Now, while negotiating from a position of strength, with the major demand of complete withdrawal of foreign troops, the Taliban have always assumed an end state in which the control of the republic would fall in their hands, one way or the other. It is to be noted that the Taliban never gave intra-Afghan dialogue and proposed power-sharing formulas any heed or importance, for that matter. The Taliban committed very little i.e. only ‘denying space to international terrorists on Afghan soil’, as compared to what the US was ready to offer through a peace deal. The prospects of peace talks as a success story were always dubious in lieu of Taliban’s demand of complete drawdown versus America’s desire to maintain purpose-specific presence in Afghanistan.

In response to these developments, the Taliban have already stated a retreat from talks. As prospects of a workable ceasefire are minimalistic, as of the moment, between the government and the warring factions, more violence would be a likely outcome. While human security remains to be at stake, presidential elections – outcome of which is suspected to be a messy affair – are due in less than a month’s time. Amidst other issues, tensions regarding voters’ turnout during elections remain to be a key concern. The cancellation of talks has given President Ghani, as he runs for his second consecutive term, a new lifeline, while a deal would mean an end to his stay in the presidential palace. US Secretary of Sate Mike Pompeo, after the cancellation of talks, said that the administration remains open to a negotiated end to the war. This partly hints at the American desire of starting talks afresh as the 2020 presidential elections are approaching fast, but what new would be done to achieve the stated outcome? It is an established fact that there is no military solution to the Afghan problem, but it has become equally hard to get a nod from the Taliban for talks, once again. US Representative Zalmay Khalilzad had a tough job of convincing factions that have been each other’s opponents for decades. While he had been collating, engaging and corresponding with the stakeholders, he was seen as a person from among the Afghans to run the dialogue process decisively, as a part of a strategy. But for now, it is to see what he gets to do in future.

As the situation in Afghanistan faces a stalemate, there is a debate emerging about the possible way forward and options available. Despite the complexity of situation in Afghanistan, the Taliban very plainly have put forward their demands, which, somehow, the US finds crucial towards sustenance of peace. To sum it up, the Taliban do not consider the current setup as legit, the negotiated chances of a workable ceasefire are nil at the moment, and talks are once again out of the question but highly desired.

Rationally speaking, a deal amidst violence gives off one a bad gut feeling since an end of violence has never been in sight. This retreat might be a good chance to retrospect the shortcomings of the peace process needed for course correction. The focus must now be onto having fair elections in the country, strengthening state institutions and withdrawal of troops, irrespective of a deal. These are the very basic steps for the sustenance of peace in Afghanistan, which could obviously be followed by a deal in future.

The article was originally published in Daily Times on September 19, 2019 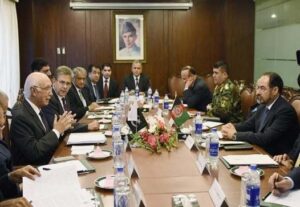