ISLAMABAD: Prof. Ahsan Iqbal, Federal Minister for Planning and Development and Special Initiatives, said that Pakistan is need of a long-term sustainable policy plan of action, and one that should not be interrupted owing to political considerations.

Addressing a seminar titled, Grand National Dialogue on “Unlocking Pakistan’s Economic Potential,” organized by the Islamabad Policy Research Institute, he said that no investment could be sought until and unless we put our house in order, and that necessitates a consistent policy backed by all the stakeholders.

He regretted that the BRI’s flagship initiative, CPEC, couldn’t take off in Pakistan to this day, owing to political bickering, unsatisfactory law and order situation and a trust deficit of sorts between various poles of power.

He recalled his previous government’s efforts in launching Vision 2010, and then again reviving the same policies in 2013 under the Vision 2025 strategy. He, however, said that they could not see the light of the day, and the result is an economic mess before us. He said that political differences are appreciated, and a way to go in any pluralistic society, but not at the cost of vendetta. He observed that the budget for 2022-23 is no more than a nightmare, and there is hardly any funds at hand to carry on the business of the state as well as development. The enigma is that borrowing is needed to meet day-to-day expenses, and this is detrimental to progress. “The sooner we come out of debt trap and deficit economy, the better,” he observed.

He cited the examples of Bangladesh, Vietnam, Cambodia, Laos and Myanmar to make a point that these fragile economies grew because of a sustained approach, and by winning over the confidence of the international investment market. He pointed out that Pakistan’s Foreign Direct Investment is hardly to the tune of $1.5 billion, whereas there is a cash treasure floating around in the Asian markets soliciting competitive economies.

Ahsan Iqbal remarked that Pakistan has come down in the last 25 years, and we need to do some deep introspection for this failure.

He said that high growth rate tempts imports, and this is where we fall in the trap of circular debt and current account deficit. He said that Pakistan is in need of export-led growth, and that too with a consistent decade-long plan of action. He called for a national consensus on economy, and invited stake-holders across the board to huddle together for bailing out economy, and rebuilding a sovereign economic edifice.

Former Board of Investment chairman Haroon Sharif articulately made a case as to what is needed to rise from ashes, and remarked that economies grow when investment to GDP ratio grows, and that is missing in the case of Pakistan.

He said that borrowing is not an alternative to investment, and investors are discouraged in regions of internal and external conflicts. He said that Pakistan has not been able to attract potential investors because of inherent flaws, and many of them pertain to our approach towards the capital.

Mr Sharif said that Pakistan’s over-reliance on essential imports needs to change. “Policy inconsistently, lack of dispute resolution capabilities and conditions in-conducive to growth at large is a challenge Pakistan needs to address,” he observed.

“It is our job to grow. A stable Pakistani economy is only in our interests — foreign investors will only want their money back. We need to diversify our pool of aid. We are far too dependent on multilateral agencies controlled by the Western powers, Haroon Sharif lamented.

He said that the future of world finances is in Asia, rather than Europe. He categorically mentioned the Sovereigns Funds of Qatar, the UAE, Abu Dhabi, Kazakhstan and China that stand to the tune of hundreds and billions of dollars, and advised that they need to be tapped.

He gave the example of DIFC in the UAE, and said that investors should not be conditioned under national laws, and a system as in vogue in Dubai should be introduced for investors and setting up economic zones.

Dr Usman Chohan said that goods and services were formerly taxed under the FBR, and it was later reincorporated into being a part of provincial revenue after the 18th Constitutional Amendment.

He said that with 10% tax collections, financial stability will always remain a challenge for Pakistan. He also pointed out that freedom, experts and data are pre-cursors that Pakistan need to fulfill to find its economic bearings in the new era.

“A long-term approach to the ultimate goal is important. Moving from one crisis to another has an effect on our mental health, as well as on our social fabric, which makes it a concern beyond balance sheets, he Dr Chohan added.

Ms Maha Rehman believed that the deeper issue is about incentive alignment human capital and protection from extractive, rent seeking elements. This is where Pakistan has to pivot its concerns. She said that Pakistan went from having one of the highest GDP per capita in South Asian nations to being at the bottom of the table in a span of four decades. “This structural breakdown needs to be addressed,” she pointed out.

She added that human resource is being capitalized on for Pakistan to find its way to economic stability.

Dr Ikramul Haq spoke at length about the trial and error story of the taxation system in Pakistan. He eloquently made a case as to how provinces and the federation had been at odds, and how a system is yet to be designed for fair collection of revenue.

He told the participants that the real dilemma of the taxation lies in in its dichotomy in vogue. He said that businessmen claim that they want to pay taxes properly, but the FBR often acts as an impediment.

This is why allegations of institutional harassment on the part of FBR, and the lack of a speedy redressal system needs to be addressed. He said that sales tax is a textbook example of dishonesty in ours taxation network.

Dr Haq remarked that the judicial system also needs to be revamped. “A national tax court rather than multiple hearings from multiple courts will help in judiciously furthering a smooth flow of taxation,” he observed.

President IPRI Ambassador (retd) Raza Muhammad in his remarks outlined the potential that Pakistan’s economy possesses, and urged upon the policy-makers to tap it to the maximum. 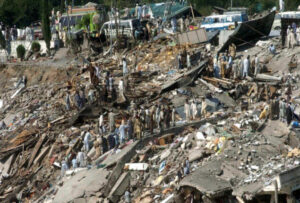 The 2005 Earthquake In Kashmir: Remembering The Deadly Disaster That Hit Pakistan

Will a new political landscape translate into new policies?