ASIA-Pacific is vast, in terms of geography and population. It covers a total land area of 21 million square kilometres; has a population of 4.4 billion or 60 per cent of the world population; and GDP of more than US $40 trillion. The Asia-Pacific economies are heterogeneous. These are emerging markets and experiencing rapid economic growth. In the last quarter of 2014, the region’s GDP grew by 6.3 percent and the forecast for this first quarter of 2015 has been 6.2 percent. Hence, the markets are stable and growing. Continuing structural reforms and resultant spillovers are delivering positive results, despite continuing slowdown in Japan and the Eurozone.

The US is trying to rebalance its presence in the Asia-Pacific region in order to regain its place in the wake of the rise of China and other emerging powers. The US role in Asia-Pacific is changing according to its ‘Pivot to Asia Policy’. Although the US is facing various challenges in the region, it will remain a major player in Asia-Pacific and will try to minimize the emerging role of China. In this context, the US wants its allies in the region including Japan, South Korea, some members of ASEAN, Australia and even India to support its strategy of containing rising China. In this regard China-Japan tensions are a matter of concern for regional countries.

Rising China is the key concern for the US as a competitor in the global politics and economy. Hence engaging China by the US within East Asia is extremely essential. For the US dealing with the former Soviet Union was easy, with a clear policy of mutual enmity and assured destruction. Unlike former Soviet Union, the US has its economic interests linked with China; therefore politically China is a great challenge for the US.

China has already established its eminence regionally and globally; whereas other nations such as Japan, South Korea, India, Russia, ASEAN, and Australia are formulating their strategies to project their power, resolve tensions and adjust to new realities. China and Japan have moved to ease their strained relations over the Diaoyu/Senkaku Island but this is not the only issue that keeps the temperatures high between the second and the third largest economies of the world. Other issues include the shaping of the new world order, including the composition of the reformed Security Council and the industrial competition between China and Japan. To increase its military role in Asia-Pacific, Japan mainly concentrates on ASEAN, Australia, and India.

The Korean Peninsula is volatile though it is calm for the time being. Divergences over the disputed islands in the South China Sea pose even more scary security challenges. These scenarios are compounded by widely perceived Indian ambitions to play a major power role in the region and to contain China. Despite the divergences amongst Asia-Pacific nations on the strategic and political issues, the economic complementarity and connectivity between them is growing at a fast pace. Pakistan is supporting all efforts for peace, stability and prosperity in the region. Besides, Pakistan believes that Asia-Pacific should not become a ground for strategic competition to outstrip each other but a shared space for economic growth and cooperation. China has emerged as Pakistan’s most trusted ally both in strategic and economic realms. The launch of the Chinese initiative of ‘One Belt, One Road’ is a historic and revolutionary turning point. This initiative calls on all nations in Asia, Africa and Europe to steer themselves away from confrontation to cooperation, from geo-strategy to geo-economics, and from rival economic blocs to regional and inter-continental connectivity. The China-Pakistan Economic Corridor is a central plank of this grand transformative plan. The signing of 51 MoUs between Pakistan and China is historic, which has further consolidated Islamabad relations with China and would usher in a new era of progress for the people of Pakistan. These investment flows, totalling US $46 billion, that are expected under China-Pakistan Economic Corridor in the energy, infrastructure and industrial sectors will help graduate Pakistan to a higher level of growth and development, as well as improve corporate productivity. Pakistan in the coming decade will be able to join the ranks of rapidly growing emerging nations.

In international diplomacy Pakistan should evolve a new paradigm of peaceful co-existence that benefits all nations. In pursuit of this policy, Islamabad is not only deepening its ties with China, but also reinforcing its bilateral relations with all East Asian nations, including Japan, South Korea and ASEAN. It has a separate bilateral track with the US, which is playing an active role in the Asia-Pacific and South Asian regions. Pakistan has been a Sectoral Dialogue Partner of ASEAN since 1993. It wants to become a full dialogue partner of ASEAN. In 2004, Pakistan acceded to the Treaty of Amity and Cooperation in Southeast Asia and joined the ASEAN Regional Forum (ARF). In 2005, ASEAN and Pakistan signed the Joint Declaration for Cooperation to Combat Terrorism. Pakistan is now paying special attention to expand its relations with ASEAN in the areas of trade, industry, investment, science and technology, drugs and narcotics, environment, and humanresource developments.

Relations between Pakistan and India have remained tense since Narendra Modi became Prime Minister despite a promising start when Prime Minister Nawaz Sharif attended the swearing-in ceremony in New Delhi last year. The dialogue between India and Pakistan to resolve their outstanding issues has not made much progress in the past two decades and is now virtually suspended. Pakistan would continue its policy of a peaceful neighbourhood. Therefore, it wants to resolve all outstanding issues with India, including Kashmir through dialogue so that Pakistan can remove all the barriers to bilateral and regional economic cooperation.

Pakistan needs to put its own house in order. Domestic stability and national harmony will have positive impact on external relations of the country. Pakistan also needs to diversify its geo-strategic possibilities and also seek every opportunity for improvement of its bilateral and multilateral cooperation in the Asia-Pacific region. Furthermore, formulation of a diverse and long term proactive foreign policy will help Pakistan in its economic development. Asia-Pacific is an important region in global decision-making at the United Nations and its related organizations and international financial institutions. Pakistan needs their support on UN reform, peacekeeping, disarmament issues, international finance, post-2015 development agenda, climate change, human rights and elections in the UN and other international bodies. Pakistan’s bonds with Asia-Pacific states in these fora are strong; it will work to make them stronger. 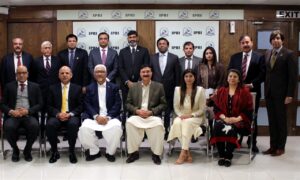