Biden’s step into the Presidential Office is considered as the dawn of a “new era” in the United States (U.S.). With the new administration coming in with a different agenda, it is interesting to speculate possible changes to the strategic architecture in South Asia, particularly to the U.S.-Pakistan relationship.

Conventional wisdom suggests that nothing new will be on the table. For long, U.S.-Pakistan relationship has been security-centric and has pivoted around the broader U.S. interests in the region. Thus, the obvious cooperation arenas such as the Afghan peace process would continue to drive the partnership so much that any deterioration in the peace talks, articulates senior analyst Michael Kugelman, could compromise the relationship.

This security cooperation could be expanded to add Iran to the cooperation list; meanwhile, the Afghanistan agenda remains. Besides, prospects are that the Biden administration would rejoin the Joint Comprehensive Plan of Action (JCPOA) and further initiate talks over the nuclear agreement to refine the initial arrangement. How would that be pursued is an interesting question to ask, considering the U.S.-Iran relationship suffered considerable damage under the Trump administration. In such a scenario, Pakistan could potentially offer assistance in the mediation process.

Talking of the U.S interests in the region, the burgeoning U.S. partnership with India seems like a fait accompli. In this context, for Islamabad and Washington to sustain a more promising relationship, there is an inevitable need to forge an alliance in new areas of cooperation, along with the traditional ones.

Whether or not the U.S.-India strategic partnership would further deepen under the Biden administration is a foregone issue. The question instead is what will be the add-ons in the relationship? Biden has long been a staunch supporter of deepened U.S.-India ties. Antony Blinken, Secretary of State, quoted Biden’s dream to see U.S. and India as the closest nations in 2020. Under the Obama-Biden administration, Biden was the “driving force” for the momentous U.S.-India nuclear deal in 2008. Ashely Tillis, a senior analyst, mentions that while there was still scepticism in the Capitol Hill regarding the deal, Biden lent early support in favour of it.

With an unwavering U.S.-India strategic partnership as the backdrop; as I argued previously in my essay, U.S.-Pakistan relationship suffers from a strategic dilemma. Analysts in Pakistan contend that the burgeoning arms sales by the U.S. to India would instigate an arms race between the nuclear rivals and impact the already fragile strategic stability in South Asia.  Similarly, both U.S. and India see China as a common challenge which uses, as Antony Blinken asserted, “economic might to coerce others and reap unfair advantage”. Thus to tackle the China challenge Akriti Vasudeva, a research analyst, predicts an empowered Quad under Biden. Given that Pakistan hosts the China-Pakistan Economic Corridor (CPEC), a Belt and Road Initiative (BRI) flagship project, and views it as economically rewarding for the country, this could intercept as a matter of concern between Washington and Islamabad.

Enhancing trade and commercial ties could be a good start. In recent years, there is an increasing realisation in Washington to forge an enduring trade and investment relationship with Pakistan.

Interestingly, while the Biden administration seemingly advocates an enhanced strategic integration with New Delhi, the context in India has changed and therein lie the opportunities for Pakistan. Under the Obama-Biden administration, shared democratic values was an important binding factor. While national interest may stand as a relatively more relevant binding factor, there certainly needs to be healthy signs of democracy in India for the relationship to sustain the momentum under Biden. Needless to mention the episodes of CAA, NRC, and the unilateral revocation of the special status of Kashmir last year, which have tainted the democratic standing of India. Likewise, India’s recent rejection of the Regional Comprehensive Economic Partnership (RCEP) accentuates New Delhi’s claim of a “self-reliant India”. This seeming tilt towards protectionism would not be viewed favourably by Biden’s Washington.

Stepping Out of the Box

For Pakistan and the U.S. to forge better ties, the relationship needs to tone down the securitised narratives and build equally as much on non-traditional areas of cooperation. As hyped as the Afghan peace process is for the U.S.-Pakistan relationship, this affiliation could be further strengthened with Pakistan providing assistance in integrating women in the peace talks and the development process. This would be viewed favourably not only in Kabul but also in Washington as there appears to be a renewed focus on women empowerment under the Biden administration. Washington has its first Female Vice President as Kamala Harris. Fawzia Koofi, one of the four female negotiators in the Doha peace process, stated that “with having the first female president in the U.S., women of Afghanistan have more assurance that these global rights, such as women rights, will be prioritised just as peace is prioritised.”

Enhancing trade and commercial ties could be a good start. In recent years, there is an increasing realisation in Washington to forge an enduring trade and investment relationship with Pakistan. Similarly, Islamabad is keenly pursuing economic diplomacy. With economic security coming top in Islamabad’s charts, working with Biden administration on the economic relationship should be a sine qua non. With the U.S. as the largest export destination for Pakistan, expanding the export base, working on tariffs, and removing the reservations on regularity practices and trade facilitation on both sides could serve as a first step in building a constructive relationship.

In Joe Biden’s and Imran Khan’s political ideologies, the intersecting point is the devotion to tackle climate change and corruption.

In deciphering the foreign policy orientations, the idiosyncratic behaviours of leaders play a very significant role. In Joe Biden’s and Imran Khan’s political ideologies, the intersecting point is the devotion to tackle climate change and corruption. With Biden in the White House, the urgency of the issue is reflected through the appointment of John Kerry as a Climate Envoy, a new position in the National Security Council. Moreover, in the first 100 days’ plan, Biden has announced to rejoin the Paris Agreement, calling for reducing carbon emissions. Very recently, Imran Khan also scrapped two coal-power projects, committing to cleaner power production.

Thus, environmental diplomacy could perhaps lend itself as an area of cooperation between the U.S and Pakistan. For instance, clean energy is an area both leaders are keen to work on. Those who argue against a climate change-centric cooperation, based on the “realism” lens, miss out on the larger nexus between environment and national security. Survival is one of the realist paradigm basics, and the climate change-induced impacts endanger the very tenets survival hinges on. This realisation is slowing making its way in the strategic thinking in both Washington and Islamabad.

The underlying notion is that if the U.S.-Pakistan relationship is to be sustained, both sides need to have more than Afghanistan to talk about. Seemingly Biden and Khan may have new conversations to initiate. Needless to say, creative thinking is the fundamental need to forge a deeper alliance.

Note: This article appeared in CSCR, dated 17 February 2021.
Disclaimer: The views expressed in the article are of the author and do not necessarily represent Institute’s policy. 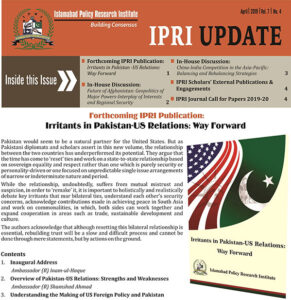 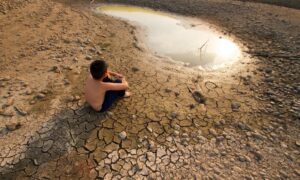 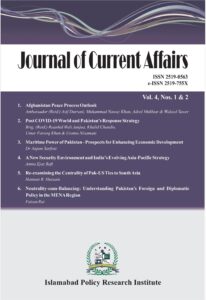