CHINA and India are two important countries of Asia and their population “accounts for 40 percent of the 6.5 billion plus people on earth.” Seeing the governance structures of China and India, they are led by different systems’.

China is ahead of India in development. As per the International Monetary Fund statistics, China will be the largest economy by 2024.

China’s image in view of the country’s economic progress is linked to “peaceful coexistence”.

China’s role in South Asia especially in backdrop of corridors and seaports portray the East Asian country as a facilitator towards regional connectivity.

Seeing India’s foreign policy in South Asia, the political construct of ‘Hindutva’, the ‘Citizenship Amendment Act (CAA)’ and the abrogation of Article 370 are all reflective of hegemonic tendencies. Whilst, India’s political contours’ in Asia Pacific focus more towards a security role in region.

The difference in China and India’s political outlook could also be due to the structural forces at play.

Looking at the trans-regional growth of China and India, both the countries have widened their geopolitical horizons’.

China by reaching out to Indian Ocean and Bay of Bengal is focusing on trading links and securing new partnerships with countries along the Indian Ocean.

While, India has engaged with countries of Asia Pacific through security and political cooperation – Quadrilateral Security Dialogue and ASEAN.

India’s military cooperation with countries of Southeast Asia, in particular the India-Vietnam defence cooperation and interest in South China Sea could provoke competitive tendencies in region.

China’s role in South Asia as evidenced by the Belt and Road Initiative (BRI) is accompanied by corridors and seaports.

China has access to Bay to Bengal through Chittagong seaport, and has also developed political ties with Bangladesh.

The evolving profile of China-Bangladesh relations indicates that the dividends of regional connectivity and economic empowerment are the leading political trends in region.

India has expressed its opposition to China-Pakistan Economic Corridor (CPEC), which is part of BRI. India did not attend the first BRI conference held in Beijing in May 2017.

India also stayed away from the Second BRI Forum held in Beijing, in April 2019.The regional quarters opposed to CPEC look at the corridor from the prism of China-India competition and Pakistan-India rivalry.

China and India have progressed beyond their regions’. China in South Asia is emerging as an active player and India by embarking upon military and security agreements with countries of East Asia is trying to establish footprints in region.

While looking at China’s and India’s trans-regional growths, it can be argued that the former’s rise has compelled the regional countries to look for new ally partners.

The regional countries as part of political and security structures (Indo-Pacific and Quad) are trying to showcase their strength.

On the other hand, China has diversified the trading links by reaching out to South Asia (and other regions’), and in a way China has pushed aside the regional opposition.

India does not have the financial strength to develop its own BRI and has no choice but to partner with the US, Japan and Australia.

China’s access to Indian Ocean will impact the region’s balance of power equation? Pakistan as part of China-Pakistan Economic Corridor (CPEC) will emerge strong; Bangladesh located astride the Bay of Bengal will also have a significant role in the region.

These developments foresee the South Asian politics tilt towards regional connectivity with China, Pakistan and Bangladesh as lead players.

Note: This article appeared in Pakistan Observer, dated 29 April 2021.
Disclaimer: The views expressed in the article are of the author and do not necessarily represent Institute’s policy. 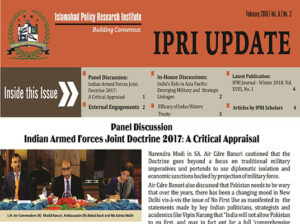 IPRI UPDATE for the Month of February 2018 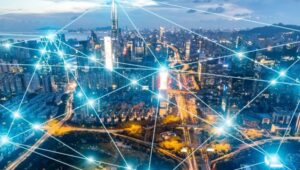 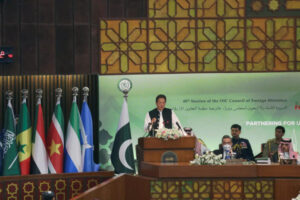