Chinese President Xi Jinping visit to Pakistan has concluded. The visit has raised the morale of the Pakistani nation. The cooperative agreements inked during the visit and, in particular, the ‘China-Pakistan Economic Corridor’ has strengthened Islamabad’s regional standing. Chinese investments will surely set the path for Pakistan’s progress. The visit also reflects China’s future interest towards South Asia. How China looks at the politics of the region and the potential associated with it.

Over the years, the regional as well as international environment somehow had not been conducive for Pakistan. Pakistan was often associated with terrorism, foreign investors were reluctant to invest in the country. Despite all these odds, China has extended a hand of cooperation towards Pakistan. President Xi Jinping’s visit to Pakistan, and the subsequent conclusion of agreements/MoUs would bring forth investments in Pakistan. With Chinese assistance, energy generation projects from water, solar, hydel, and wind would be initiated. Coal-fired power plants are likely to be installed in Thar desert to explore the area’s coal reserves (worth 175 billion tons). The Industrial and Commercial Bank of China (ICBC) would provide technical cooperation and consultative services to the Punjab government in the foreign investment sector. Moreover, the ‘China-Pakistan Economic Corridor’ linking Gwadar to China’s Western city of Kashgar would accelerate several economic zones and links between various regions of the world. China’s access to the markets of South Asia, Central Asia and Middle East would be enhanced. In particular, oil from the Middle East could be offloaded at Gwadar, which is located just outside the mouth of the Persian Gulf, and transported to China through the Balochistan province. All these developmental projects would give an impetus to Pakistan’s struggling economy. The country battling the terrorists for over a decade will receive foreign investment. Surely, this would be a relief to the common man of the country, it would empower the backward/under-developed areas of the country; Balochistan would be developed. Most importantly, the issue of energy crisis would be solved.

Seen regionally, the visit gives the impression that China supports a peaceful South Asia. During President Xi Jinping’s address to the parliament, the President spoke about terrorism. His talk was not critical of Pakistan’s fight against terrorism, nor did it question Pakistan’s role. He supported reconciliation with the extremist factions and called upon Pakistan to play an active role in this regard. Meanwhile, during his interaction with the military leadership, President Xi praised Pakistan’s successful offensive against militants in North Waziristan, clearing of militants from the area. He also welcomed Pakistan’s membership in the Shanghai Cooperation Organisation (SCO). China has also offered the joint co-production of JF-17 Thunder aircraft and tanks etc. On the Indo-Pakistan relations, President Xi did not ask Pakistan to look for peaceful ways with India, instead, he proposed to extend the economic corridor to the East and include India and Myanmar in it as well. From the President’s address, it was apparent that China preferred cooperation over conflict. This also shows that China has not tried to take sides of any one of the regional state’s (against the other), rather, its intention, is to promote regional connectivity/harmony.

Chinese move is no doubt a huge opportunity for Pakistan and the region at large. Chinese companies have established their foothold in our economy, and China is the largest economic ally of Pakistan. China has taken the first step, now it is on part of Pakistan to avail this opportunity and strengthen its economic muscle. Gwadar port located at the junction of Middle East, Central Asia and South Asia could be a role model for the world provided the efforts are made in the right direction. The port would open vistas and opportunities for Pakistan and the region at large. Western China shall have short route to the world market through Gwadar. The Central Asia, through Gwadar, would have an access to the warm waters. India and other countries short of energy can easily be supplied Liquid Natural Gas (LNG) from Gwadar. Energy cooperation would accelerate the pace of economic development, would contribute towards regional connectivity, and thus, would utter an area of brightness. 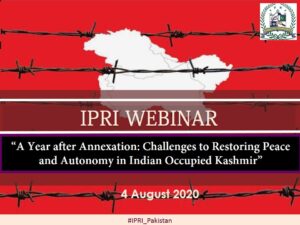 Special Webinar on A Year after Annexation: Challenges to Restoring Peace and Autonomy in Indian Occupied Kashmir