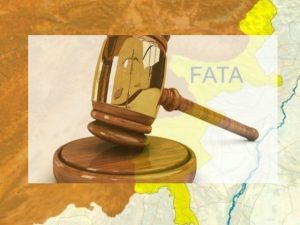 Federally Administrative Tribal Areas (FATA) is geographically located between the Pakistan-Afghanistan border and Khyber Pakhtunkhwa (KP). Out of the seven agencies of FATA, other than Orakzai, the rest – Bajaur, Mohmand, Khyber, Kurram, North Waziristan and South Waziristan share border with Afghanistan (373 miles-long border). The living conditions in FATA are poor with 60% of the population living below the poverty line and an unemployment rate ranging between 60-80 percent. Similarly, only 62% of the FATA has electricity and on average the road density is 0.17 (as compared to the national average of 0.26) – reference–Irfan Uddin, “Administrative System of FATA: A Hindrance in Economic Development”, Fata Research Centre-FRC. These indicators portray a bleak picture of FATA. FATA’s proximity with Afghanistan and the war on terror have further deteriorated the socio-economic indicators. As per the damage need assessment survey carried out under the supervision of the FATA Disaster Management Authority-FDMA (August 2014), nearly 60,000 houses had been damaged in Orakzai, Khyber, South Waziristan and Kurram Agencies.

The status of FATA, its representation in the Federation and security of the area is significant. FATA had been governed through the Frontier Crimes Regulation-FCR (formulated by the British in 1901). Political Agents (PAs) and tribal elders controlled the area. In August 2011, Political Parties Order 2000 was extended and the Frontier Crimes (Amendments) Regulation 2011 were introduced in FATA. These FATA regulations were steps in bringing the tribal area into the main stream national politics. In November 2015, the FATA Reforms Committee was formulated by the Federal government, primarily to carry out in depth analysis of the area’s dynamics and socio-economic conditions, and suggest a way forward. The Committee was headed by Mr. Sartaj Aziz, Adviser to the Prime Minister on Foreign Affairs; other committee members were Mr. Zafar Iqbal Jhagra, Governor KP, Lieutenant General (R) Abdul Qadir Baloch, Minister for SAFRON, Mr. Zahid Hamid, Minister for Law and Justice, Lieutenant General (R) Nasser Khan Janjua and Mr. Muhammad Shehzad Arbab, Secretary SAFRON. The committee had proposed a number of recommendations for the betterment of the area, it called for judicial, administrative reforms and development activities, one of the recommendation referred was the integration of FATA with KP. In this backdrop, the decision to merge FATA with KP by the Federal government (2 March 2017) is a progressive move. It will liberate FATA from the centuries old Frontier Crimes Regulation-FCR (formulated by British in 1901). It will be a new beginning towards democratic reforms and opening up of development opportunities for the area. The merger will be a slow and gradual process. The federal cabinet has approved a 10-year reform package to bring the tribal region at par with other developing areas of the country. Despite the geographic proximity and cultural homogeneity between FATA and KP, the merger could face complexities. An alliance of Jamiat Ulema-e-Islam (JUI), Pukhtoonkhwa Milli Awami Party (PMAP) leadership and a group of Malaks have already taken the matter to the court. Their claim is that the notification should have come from the President. The petition argues that under Article 247 (6) of the constitution, “the power to make a decision in relation to the merger of any part of the tribal area falls within the exclusive domain/jurisdiction of the President of Pakistan or his representative, the Governor of Khyber Pakhtunkhwa Province”. The introduction of local government system, as envisioned in the 24 point FATA reforms needs appropriate deliberation. The powers and responsibilities of the local bodies and the mode of election, whether the elections will be conducted in all the agencies simultaneously or not are the concerns which need to be addressed. The dynamics of the area are best known to the locals, and they should not get the impression of being relegated in comparison to KP. To make the merger process smooth, the political will to reform is a must. In this regard, the administrative and legal reforms for mainstreaming FATA are vital. Political institutions need to be established in FATA so that the ensuing political activities can create a sense of ownership among the tribesmen.

Economic empowerment is another area of vital importance. The Rs. 110 billion development package, proposed by the six-member FATA reforms committee, had been approved for the tribal region. In the past, the initiatives to develop FATA, like the FATA Development Authority-FDA, and other collaborative endeavours with international organizations have failed. US $ 2.46 billion were pledged for a nine year development programme (2006-2015); the aim was to improve the literacy rate of FATA from 17% to 30-40%. Unfortunately, it did not work out. To ensure that the development initiatives produce the desired results, concerted efforts at both the provincial and federal levels are needed. The security aspect also needs consideration, and to defeat militancy, the root cause needs to be addressed. Despite the fact that the terrorist hideouts had been dismantled, bomb blasts and suicide bombings continue. To counter militancy in FATA, the local narratives and dynamics of conflict have to be taken into account. There is a need to educate the youth of FATA, and provide them with job incentives. FATA is a resource rich area; copper deposits worth US $ 280 billion are located in North Waziristan Agency (NWA), the second largest deposits in Pakistan after Balochistan. These resources need to be explored. For that matter, the area’s security should be enhanced; the centre needs to improve the law and order situation.