People’s perceptions on issues are based on media’s perceptions and media’s perceptions are based mostly on non-investigated assumptions. More information than ever is being produced on more subjects/themes and consumed now than in ever in Pakistan’s history. In 2002, there was only one TV channel and one radio station in the country. Now there are nearly 100 TV channels with 42 being 24/7 current affairs channels (14 of them in regional languages). There are about 120m TV consumers, of which 60m consume private TV channels. There are about 140m radio consumers and the newspaper circulation figure is barely 6m with about 5 readers to a paper making about 30m daily newspaper readers.

Over the past decade media has been most influential in impacting people’s thinking on political and social issues. The uprising against a military ruler (Musharraf) by lawyers and judges wasn’t the first time in the country’s history. It also happened during Ziaul Haq and Ayub Khan’s time. However, this time the difference was a visual medium that brought real-time information, making it possible to sustain the momentum of a growing resistance movement. On social issues also the media has helped change the perception on issues such as domestic violence, child rights, education and health.

However, it’s the state’s responsibility to maintain its writ in letter and spirit and deal with the issues like terrorism, security, law and order and citizen’s rights.

The booming electronic media is powerful, but young, and needs to find a greater balance in its coverage of political and conflict-related issues. Many journalists need training.

Which media is more effective, electronic or print?

For policymakers print media is most influential because it is urban-centric, news is backed by editorials in which newspapers take positions on issues. For the ordinary people TV is most important as information is backed by visuals and provides real-time information and news. However, increasingly radio is proving great community medium as FM radio stations can talk about local issues and promote local voices, dialects and local priorities. Radio is also almost non-sensationalist making it more reliable for local listeners.

Weaknesses and Strengths of Media of Pakistan

Strength of electronic media is that it can make it difficult for govts and authorities to cover up misgovernance and abuse of power. It can also mobilize public opinion quickly in favour of reformist initiatives.

The weaknessis that its nature of real-time operations can dilute the filtration process of verifying information. Real-time media can get sucked into a race for ratings which can result in sensationalist and hysterical media that can end up distorting perceptions about issues.

Article 19 of the Constitution of Pakistan

1)      Every citizen shall have the right to freedom of speech and expression , and there shall be freedom of the press , subject to any reasonable restrictions imposed by the law in the interest of the glory of Islam or the integrity , security or defense of Pakistan or any part thereof, friendly relations with foreign States , public order , decency or morality , or in relation to contempt of court or incitement to an offence

Media and the State

Following comments and suggestions were made by the IPRI scholars after the presentation:

An informed citizenry and an enlightened society cannot be brought about in the absence of a professional and public-interest media. As a multi-national, multi-ethnic, multi-sectarian, multi-religious, multi-linguist state, Pakistan will remain confused if Pakistani media remains confused about its missionary objective of being a public-interest, ethical profession. 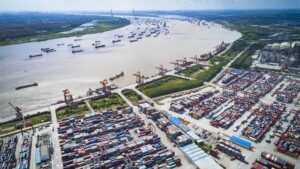 Why are Dual Circulation and the YREB Vital for China and Beyond? 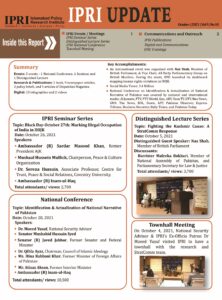