Pakistanis have for long been longing as to what is national security. In their 75 years of trial and tribulation, all kinds of definitions, assumptions and misnomers have made their way. But to this day, the security conundrum remains an unexplained enigma of our national life. The conventional notion that the armed forces are responsible for national security is qualified to an extent, but that is not the case in totality.

The phenomena of globalisation and the quest for more socio-political rights in personal lives have given birth to the rational thinking that it is evolution of political space that matters in ushering in security. This is what is called people’s security and comes on the sound foundations of social mobility. Let’s have a cursory look as to how we as a nation-state have evolved.

As a leap forward, Pakistan now has a formal National Security Policy and it luckily encompasses all segments of national life. While laying thrust on exploring economic tangibles and empowering the people by making them part of the evolutionary process in policy-making as well as nation-building, the document is a great beginning.

But there are hiccups too. At the moment, the will has triumphed but the process of amalgamating synergies remains an uphill task. No doubt, the process is cumbersome. This is where, perhaps, the role of inter-provincial coordination comes into essence — as well as devolution of rights and powers.

As a federation, Pakistan has to look deeply into the sentiments of its confederating units, the provinces. It has to play the role of a generous patron in disseminating national resources as well as judicious counselling when faced with odds. Though the dismemberment of Pakistan, 24 years after its creation, continues to haunt its national psyche, the consolation point is that the moth-eaten state has survived, and moved on.

Recent history is amassed with success stories in terms of national integration. Notwithstanding almost two decades of war on terrorism fissures, and unending external threats from eastern and western frontiers, Pakistan’s federation has gathered momentum and an organic vitality.

The biggest breakthroughs are incorporation of Gilgit-Baltistan and the Federally Administered Tribal Areas in the federation. Likewise, Islamabad has enjoyed complete harmony in governing Azad Kashmir as an independent entity with full powers at the latter’s indigenous level.

This is no mean achievement for a country that has not been at peace with itself, and where a host of regressive factors such as extremism, ethno-lingual discords and foreign meddling had kept it bogged down in tatters. The country likewise experimented with One-Unit, the presidential and quasi-parliamentary systems too, and is still in search of perfectionism.

In this age of interdependence and technological superiority, the notion of governance is getting quite demanding. It is no coincidence that the necessity of cooperative federalism is being felt more than ever. But in order to realise the fruits of consensual coexistence, there are three essentials: across-the-board accountability, rule of law and a functional local government system.

A referral to Principles of Policy in the Constitution will reveal that effective provincial harmony with the federation cannot be realised without a mechanism of devolving powers and empowering all strata of society. It is a pity that this constitutional ordained aspect has been the most neglected one in our milieu.

It is also ironic that extra-constitutional governments are more pro-local government than the political dispensations. And, likewise, rule of law and adherence to accountability had been always at the backburner of our national polity, resultantly creeping in the nuisances of feudalism, adhocism, despotism and last but not least the sense of otherness.

These ills have thrived on class-based structures — inevitably pushing the majority populace into poverty and degeneration, and a percentage or so elite climbing the ladder of prosperity with all impunity. This has bred insecurity, and is the crux behind our failures as a cohesive nation-state.

What is needed today is to broaden the debate over national security, encompass people from all strata, create political ownership and empower the role of inter-provincial coordination for a strong and workable federation. Only then can the true narrative of national oneness be furthered.

We have made great strides in academically, politically and institutionally drafting a national security policy in consensus, it’s high time to further the envelope in implementing it in realism.

To do so, Pakistan is instantly in need of reforms in both evolutionary and revolutionary essence. Piecemeal drafts and gestures are a waste of time. The nation cannot wait anymore for blanket administrative and judicial reforms — and a robust and powerful local government is the key to ensuring national harmony.

Let there be a political connect between the federation and its units, and that can only come through the local governments. This will inevitably strengthen national security. Empowering the people is tantamount to empowering the state.

Note: This article appeared in Tribune, dated 18 March 2022.
Disclaimer: The views expressed in the article are of the author and do not necessarily represent Institute’s policy. 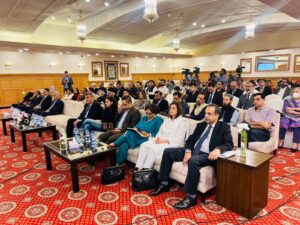