This is the age of economic interdependence and globalization in the world. South Asia cannot remain an exception. This subcontinent, with India and Pakistan as major countries, is housing over 1.25 billion people. In this 21st century South Asia is still the poorest region in the world with maximum poverty in India which is prematurely claiming that it has become a major world power. This is high time that in the subcontinent all states accord priority to poverty alleviation and move towards attaining a degree of prosperity. To realize this objective there is a need that all South Asian countries should focus on fast tracked economic development by achieving high economic growth rates through regional extra regional economic cooperation and integration. But this is only possible if sustainable peace and harmony prevails in the region.  To establish long lasting peace and stability in the SAARC region it is necessary that good relations are established between India and Pakistan by resolving all bilateral issues.

In this context it is imperative to resolve the Kashmir dispute according to the wishes of people of Kashmir with the concurrence of both India and Pakistan. It is a good sign that the objective of poverty alleviation in South Asia through economic development is being demanded by the masses and it is also being given priority by the leadership of all states. At this point of time this sentiment prevailing in South Asia also coincides with the election agenda of India’s newly elected BJP leader, Narendra Modi  (prime minister designate),who had placed economic development in India as main point of the agenda. To facilitate implementation of his agenda of economic development and poverty alleviation in India, Mr.Modi would do well if he takes initiatives towards achieving regional economic integration by establishing sustainable good relations between India and Pakistan through resolution of Kashmir and other disputes in a rational and mutually acceptable manner.

For last some years Pakistan has been consistently endeavouring to resume composite dialogue with India aimed at moving forward and achieving progress in resolving all issues simultaneously including Kashmir dispute. But, congress government in India has been relegating Pakistan’s this demand on one pretext or the other. Now that BJP has won Indian elections with Narindera Modi all set to become India’s Prime Minister, it is appropriate time that on assuming that responsibility Modi should accord priority to resuming composite dialogue with Pakistan. Since BJP has shown its popularity in India, it appears that Modi government will be able to take hard decisions regarding creating sustainable peace in South Asia by resolving Kashmir dispute as a major irritant between India and Pakistan. For this purpose it will also be possible for BJP government to influence public opinion in favour of moving away from India’s current position of calling Jammu and Kashmir as an integral part of India. And after that it will become easier for both India and Pakistan to find a plausible solution of Kashmir dispute in the light of UNSC resolutions on the subject and according to the wishes of the people of Kashmir. If this issue is resolved it will not only help in achieving an early peace and stability in Afghanistan it shall also facilitate resolution of other disputes in the region.

Moreover, resolution of Kashmir dispute will accrue following major benefits to South Asia. Firstly, it will greatly benefit the people of Kashmir. They will be relieved of the agony and pain due to violations of human rights being committed by Indian security forces for last 24 years. Their sufferings will end and they will be able to live in peace according to their conscience and will also be able to enjoy lot of economic opportunities. Secondly peace will facilitate economic integration in South Asia. Pakistan will accord MFN status to India, Pakistan-India trade will flourish in a major way, bilateral economic cooperation will start and private sector of both countries will be able to undertake major investments in each other’s country. Political and economic cooperation at SAARC level will be realized which will enhance growth and economic development in all countries. It will also boost South Asian trade by implementation of SAFTA which will further contribute towards economic progress. Both Pakistan and India will be able to reduce their defence budget and spend much more on economic development. Thirdly, harmony and peace in the subcontinent will enable the region to achieve economic cooperation with West Asia and Central Asia. Pakistan will be able to provide transit trade route to India to Central Asia through Afghanistan which will not only largely benefit India but also other South Asia countries. This will facilitate construction of rail, road, air, telecommunication network, enhancement of people to people contacts and establishment of trade between South Asia and Central Asia. It will also facilitate construction of oil and gas pipelines and electric supply lines from Iran and Central Asia to South Asia, thus addressing subcontinent’s huge energy shortages on long term basis. This will further hasten South Asia’s economic development.

From the above discussion it appears that sustainable Pakistan-India peace and friendship based on just and mutually acceptable resolution of disputes would multiply economic integration and development of South Asian states to a level that South Asian poverty can be eliminated and people of the subcontinent will also be able to realize the dream of attaining prosperity. Although at this stage this all appears to be a wishful thinking but it is possible to realize this dream in South Asia provided Mr. Modi takes initiatives for peace with Pakistan as discussed above. 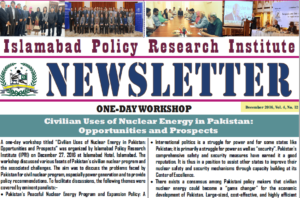