The Middle East has long been engulfed in multiple crises, which do not seem to end any time soon. Contributing factors to the deepening turmoil in the region are continuously aggravating wherein extra-regional interests, sectarian division, growing ethnicity, Arab Spring like movements and struggle for power among the Middle Eastern leaders are the most important. The emergence of the Islamic State of Iraq and the Levant (ISIL) and the prevailing chaos is evident of the fact that how non-state actors (NSAs) as well as international players in the conflict are fully exploiting the weaknesses of the Arab world.

Despite numerous attempts for unity and convergence, unfortunately, the Arab world has so far failed to build an efficient regional system that is homogeneous in orientation and unified in its foreign policies. Since its foundation, the Arab League (AL) has acted primarily as a formal framework for meetings without transforming it into a driver of cooperation and joint work. Other regional forums such as the Arab Cooperation Council and the Gulf Cooperation Council (GCC) have also failed to mobilize the state capabilities to face the challenges of economic and cultural globalisation. Iran is also essential to the peace process in the Middle East region, having influence in several parts of the Islamic world. The Middle East would remain an open arena for regional conflicts shaping the future of the region, unless there are diplomatic solutions to the prevailing crisis.

As far as South Asia is concerned, instability in the Middle East directly affects the South Asian states, especially Pakistan. Pakistan’s strategic location and its geographical proximity to Iran are of great importance. It also enjoys a close relationship with Saudi Arabia. However, ties between India and the Middle Eastern states have been expanding due to economic interests. Given the regional dynamics of South Asia, both India and Afghanistan can prove detrimental to Pakistan’s interests in the Middle East.

Given these circumstances, it needed to be analysed that what were the geo-strategic and geo-economic drivers of the crises in the Middle East; how South Asian players could benefit the most from the chaos by undermining Pakistan’s policy options in the region; and what policy measures could be taken to identify issues arising out of the Middle East crises and to guard Pakistan’s interests there. To find the answers to these questions, IPRI organized one-day conference, which came up with useful recommendations on the subject for the decision makers to plug loopholes in Pakistan’s Middle East policy.

Ambassador (R) Abdul Basit, President IPRI, welcomed the distinguished speakers and participants in the conference. He said that it was the policy of IPRI to organize conferences on topics of national, regional, and international significance. While comprehending the theme of the conference, he said that the Middle Eastern politics and the ongoing developments in the region are subjects of utmost importance for regional as well as global players. He said that the situation in the Middle East had both geo-strategic and geo-economic factors at play, and both the factors needed deliberation prior to policy formulation. Seeing the Middle East from Pakistan’s security calculus, the country has religious bonds as well as economic interests. A large number of Pakistani diaspora lives in the Middle Eastern countries and the remittances received contribute significantly to the country’s economy. Thereby, whether it is Yemen, Syria or the Gulf countries, the situation has a direct bearing on Pakistan in one way or the other. He cautioned that the prime security concern at the moment was the threat of ISIL and the threat is further compounded by the terrorist outfit’s ingress in neighbouring Afghanistan (Kunar province).

Ambassador (R) Inamul Haque, in his keynote address while chairing the academic session, remarked that the current turmoil in the Middle East is neither spontaneous nor random. According to him, it was a deliberate long-term policy of some powers to create chaos in the Middle East and abet Israeli hegemony. He referred to the 1990s gulf war, when stringent sanctions were imposed on Iraq, and the country was not able to import medicines. When Madam Albright, the then US Secretary of State was questioned by a journalist about the dying kids due to lack of medicines, she defended the US policy; her reply was “hard choice half a million children’s death no issue”. The policy of the intervening powers is to forcefully change the regime, reinforce civil unrest, and control the oil resources of the region. The so-called policy of nation-building is achieved through the brutal use of force and loss of life. The slogans of human rights and democracy are being employed to provoke the benighted people of the region. He said that the coercive policy against Iraq in the aftermath of 9/11, pursued under the garb of weapons of mass destruction (WMDs), only led to the destruction of the country. He referred to the book titled: “Price of Loyalty” by Paul Suskind, in which it had been revealed that the then US administration had sought advice from the National Security Council to attack Iraq and control the country’s oil resources.

While discussing the foreign powers policies in Libya and Syria, he opined that the forceful occupation and the regime change led to chaos. The secular leadership of these countries was targeted with the hidden aim of destruction and control over resources. He referred to the disclosure made by the French Foreign Minister Roland Dumas in 2009, informing that the UK was preparing for a war in Syria. He said that as a result of the foreign intervention in Syria, 330,000 Syrians have died and more than 11 million displaced since 2011. Over the situation in Yemen, he said that the country had been destroyed; famine and cholera had decimated the populace. The so-called Arab Spring was a flash in the pan, exploited by the foreign powers to overthrow regimes in Tunisia, Egypt, Libya, and Yemen, and unleashed the ongoing civil conflict in Syria.

He said that some foreign powers had provoked the sectarian strife in Muslim countries. In this regard, he referred to a writing “The Redirection” by Seymour Hersh revealing some foreign powers  support to Sunni fundamentalists against the Shi’ite Iran. Further, he reiterated that their goals in the Middle East were to create chaos, making the countries unstable, and subservient to the US and its ally Israel. Over the Iranian nuclear deal, he said that the Iran’s compliance with the Joint Comprehensive Plan of Action (JCPOA) was with them which had earlier passed the Iran Nuclear Agreement Review Act (INARA) in 2015. Trump’s recent statement has jeopardized, but not annulled the deal. However, if the US Congress reimposes the sanctions that were suspended as a result of the deal within sixty days by a simple majority, the other signatories of the deal will be in murkier waters.

Ambassador Inam also highlighted the regional players’ objectives. Starting with Israel, he said that Israeli design is to dominate the region, eliminate the Palestinians, take over the West Bank, and impose one-state solution. He added that the Palestinians are being systematically deprived of their land in the West Bank and new settlements are being built to create new realities on the ground by dispossessing the Palestinians. As regards Iran’s regional role, the country wants to be an assertive power and exert influence in Iraq, Syria, Yemen, and Lebanon. The Turk’s are opposed to a Kurdish state and support the anti-Kurd alliance with Iraq, Iran, and Syria. Saudi Arabia desires to be a dominating power in the region.

Dr. Nazir Hussain, while speaking on the topic, i.e. “Middle East Crisis and Pakistan’s Foreign Policy Challenges” said that historically the Middle East had never been at peace. Since the 1920s, the intra-Arab rivalries had dominated the regional politics. Traditionally, the three major powers in the Middle East had been Egypt, Iraq, and Iran. While discussing the ongoing crisis in the Middle East, he said that the situation was an extension of the past rifts. He was of the opinion that the element of sectarianism had further complicated the politico-religious conflicts. He remarked that the Shia-Sunni strife was being employed by the political players in pursuance of vested interests, which in actual was the power politics. He also referred to the political set up in the Arab world. He said that with the exception of Iran, Israel, and Turkey, the majority of the Arab countries did not have stable political institutions. The weak state structures made the Arab world vulnerable to the outside influence. The discord and discontent within the Arab world is being exploited by extra regional players. In this entire scenario, the Muslim world is at loss, where the Arab Spring has turned into Arab Winter.

On Pakistan’s relations with the Middle Eastern countries, he said that the Islamic and cultural links enhanced Pakistan’s interests in regional developments. Dr. Nazir viewed late Prime Minister Zulifqar Ali Bhutto’s Middle East policy as instrumental in uniting the Muslims. The 2nd Summit of OIC was hosted by Pakistan. The 1998 nuclear explosion of Pakistan was welcomed by Saudi Arabia. These developments portray Pakistan’s interests in the Middle Eastern politics. He also mentioned the division within the Pakistani population over Saudi Arabia and Iran.

Concerning the India-Iran burgeoning ties, he remarked that the vacuum left by Pakistan at the regional front had been exploited by New Delhi. India has cultivated political and economic ties with Iran, while the Iran-Pakistan gas pipeline is still in the air as the current political leadership has gone for importing Liquefied Natural Gas (LNG) from Qatar.

Dr. Ejaz Shafi Gilani spoke on “Safeguarding Pakistan’s Interests in the Middle East: A Way Forward” and was of the opinion that the scepticism over the policies of extra regional players towards the Middle East stemmed from the fact that those powers had not been able to attain the strategic goals; neither democracy has been established, nor there has been peace in the region. The lack of deliverance on their part refers to their limitations. It also speculates a likely change in the existing balance of power.

Dr. Gilani provided up to date population, trade, Gross Domestic Product (GDP), and military expenditure of the 22 economies of the Middle East and North Africa (MENA) region. He was of the view that any research first needed to define which countries, specifically came into this region. He shared that with its 400 million population and higher per capita income, MENA’s US$ 4 trillion economy had been spending US$ 118 million on military expenditures, and receiving US$ 136 billion in Foreign Direct Investment (FDI). He informed that Pakistan has 1.9 million workers in Saudi Arabia, while the UAE is home to 1.2 million, and Oman, Kuwait, Qatar, and Bahrain nearly 0.7 million Pakistani workers, which was nearly 50 percent of the total workers abroad. The 63 percent of remittances to Pakistan’s national exchequer come from Saudi Arabia (29 percent), UAE (22 percent), and other GCC countries (12 percent). He pointed out that, contrary to popular perception, Saudi Arabian and the UAE’s FDI to Pakistan had reduced dramatically over the years and had now been overtaken by China. 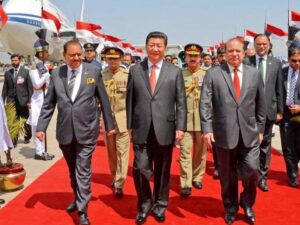 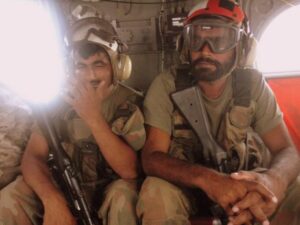 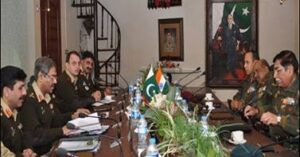