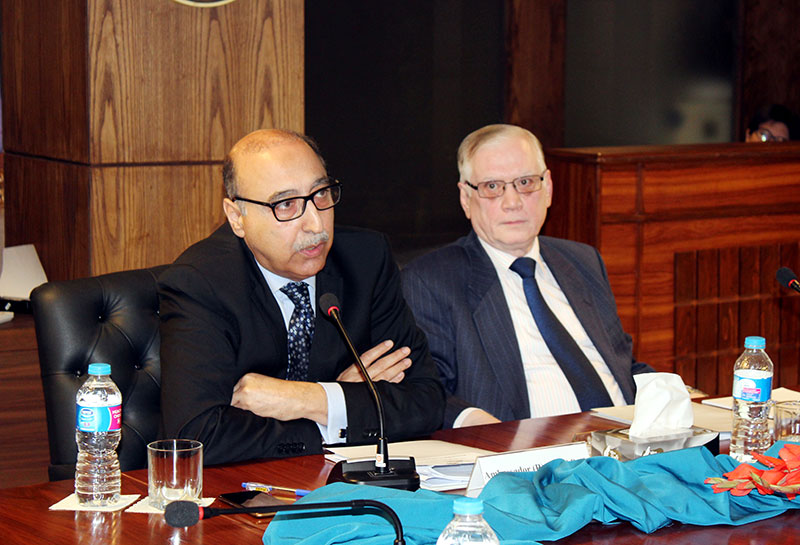 A one-day media workshop titled “Foreign Policy and Diplomacy” was organized by the Islamabad Policy Research Institute (IPRI) on January 18, 2018 at the IPRI conference hall, Islamabad. The workshop consisted of one working session covered two sub-themes, i.e. “Pakistan’s Ministry of Foreign Affairs and Vienna Conventions” and “Important Terms and Definitions of Interest to Pakistan and Their Right Usage.” The conference discussed in detail the organizational structure and functioning of the Ministry of Foreign Affairs (MOFA) and missions abroad, Vienna Convention on Diplomatic Relations 1961 and Vienna Convention on Consular Relations 1963 along with the important terms and definitions. Three scholars who spoke at the workshop included:  Ambassador (R) Abdul Basit, President IPRI, Ambassador (R) Tajammul Altaf, former Additional Foreign Secretary, MOFA and Ms. Gulshan Bibi, Assistant Research Officer. The workshop was attended by a selected group of journalists, and IPRI researchers.

Ambassador (R) Abdul Basit, President IPRI, welcomed the distinguished speaker and media participants in the conference. He said that it was the policy of IPRI to organize conferences and workshops on topics of national, regional, and international significance. While highlighting the theme of the conference, he remarked that there are many misunderstandings about foreign policy and diplomacy, which end up with the usage of wrong terminologies. Although the terms ‘foreign policy and diplomacy’ are used inter-changeably, however, there is a clear distinction between the two, which needs to be understood in order to have a more clarity about the challenges of foreign policy and diplomacy that Pakistan is facing these days.

He identified that given the country’s size and resources, MOFA is faced with financial and human resource constraints, but even within its limited resources, the Government, with the help of the country’s robust media can work towards creating an image for Pakistan as a vibrant and dynamic country. At the end, he explained the objectives of the Pakistan foreign policy, which include promoting normal and cooperative relations with all countries with particular focus on neighbours, major powers, and Muslim countries; enhancing national security; achieving just resolution of Jammu and Kashmir dispute; promoting Pakistan’s economic development; improving Pakistan’s soft image abroad and developing a fair world order.

Ambassador (R) Tajammul Altaf, former Additional Foreign Secretary, MOFA, in his presentation on” Pakistan’s Ministry of Foreign Affairs and Vienna Conventions,” covered  historical background of the MOFA, organizational structure and functioning of the MOFA, working of Pakistan’s missions abroad, Vienna Convention on Diplomatic Relations 1961 and Vienna Convention on Consular Relations 1963. He defined the MOFA, Pakistan, as a first line of defence, plays a pivotal role in meeting foreign policy objectives and safeguarding its national interests. The MOFA functions are defined in Article 13 of the Rules of Business of 1973.

Explaining the main functions of the MOFA he ascertained that these include articulation of effective foreign policy, promotion of Pakistan’s interests abroad; relations with other countries, matters relating to international organizations and agreements with other countries, declaration of war upon and the making of peace, negotiations for settlement of issues (the Kashmir dispute), and implementation of agreements reached, etc.

Highlighting the organizational structure of Vice-Consulate/Consulate/Consulate General, he pointed out that these are subordinate/subsidiary representations of an embassy or high commission working in cities other than the capital city having a large number of the Pakistani community, which have huge potential for trade, investment and commercial opportunities. Elaborating further, he explained that a Vice Consulate is headed by a Vice Consul, whereas a Consulate is headed by a Consul and a Consulate General is headed by Consul General. They are assisted by a team of diplomats and staff. They are responsible to Ambassador or High Commissioner.

Explaining the Honorary Consulate and Honorary Consulate General, he stated that they are non-career consular officers representing other countries in their own countries and promote interests of those countries. They are prominent figures either strong businessmen or influential politicians. Elaborating further, he said that there are certain numbers of facilities and immunities, which are granted to career officers and Honorary Consular Officers such as the right to levy consular fees and charges, exemption from taxation and customs duties, and inviolability of consular archives, records and documents, etc. However, Honorary Consular Officer loses immunity if he initiates legal proceedings or if criminal proceedings are initiated against him, in that case he has to appear before the concerned authorities. The privileges and immunities granted to an honorary consular officer are not granted to members of his family, nor to the family of a consular employee.

In the final part of his presentation, Ambassador (R) Tajammul Altaf discussed the Vienna Convention on Diplomatic Relations (1961), and the Vienna Convention on Consular Relations (1963). He remarked that the first attempt to codify diplomatic immunity into diplomatic law occurred with the Congress of Vienna in 1815. This was followed by the Convention regarding Diplomatic Officers (Havana, 1928). He explained that privileges and immunities are reciprocal between the states and under these Conventions; diplomats are not allowed to interfere in the internal affairs of the host country nor allow official premises of a diplomatic mission for any improper activities.

Elaborating further, he informed that Vienna Convention on Diplomatic Relations defines the privileges and immunities of a   diplomatic mission and its personnel that enable them to perform their functions satisfactorily without pressures, fear, coercion, intimidation or harassment by the host country. This forms the legal basis for immunities. He stressed that privileges and immunities are granted to diplomats for ensuring smooth functioning of their duties. These are not meant to be abused to undertake undesirable activities.

Highlighting the provisions and principles of the Vienna Convention on Diplomatic Relations, he briefed that the premises of a diplomatic mission, and residence of the Head of Mission are inviolable (must be respected and not attacked or destroyed). These premises, together with their contents (the archives, records, correspondence and documents), and the means of transport belonging to the mission and diplomats, are inviolable and immune from search, requisition and execution. The members of the diplomatic, administrative and technical staff are also inviolable. They are not liable to arrest or detention. As a whole, they are immune from civil, administrative or criminal prosecution and jurisdiction in the host country.

He further stated that the host country is under obligation to permit and protect free communication between the diplomats of the Mission and their home country. The former at any time and for any reason can declare a particular member of the diplomatic staff to be persona non grata. Talking about the limited diplomatic privileges and immunities, he shared that these are granted to members of a diplomatic mission who are nationals of the state in which they are serving, members of the administrative and technical staff, and the private servants, cooks and drivers.

On the other hand, Vienna Convention on Consular Relations (1963) covers consular functions for protecting the interests of the sending state and of its nationals.  Explaining the consular functions, he identified that these help in developing of commercial, economic, cultural and scientific relations, issuing passports and travel documents to nationals of the sending state and visas to persons wishing to travel to the sending state. Rather, the consular acts as notary and attesting registrar. He transmits judicial and extra-judicial documents and facilitates movement of vessels and aircraft.

Elaborating further, he maintained that the premises of the Consulate are inviolable. The Consular officers are entitled to communicate with the competent local authorities. The privileges of career consular officers are by and large the same and similar to those of members of the diplomatic staff of an Embassy or High Commission. A consular officer is not liable to the judicial and administrative jurisdiction of the host state.

To conclude, he emphasized that the MOFA and Pakistan’s Missions abroad are serving the state and its people with conviction, dedication, capacity, sense of responsibility and commitment. 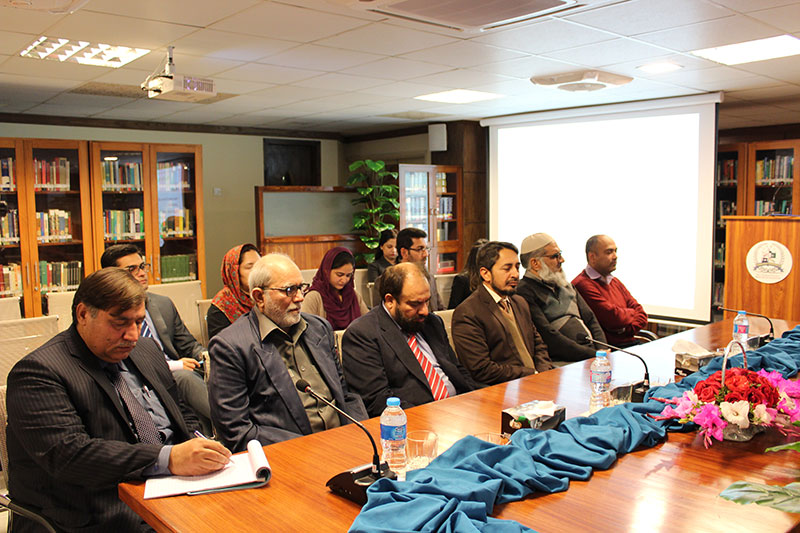 Ms. Gulshan Bibi, Assistant Research Officer, IPRI gave presentation on “Important Terms and Definitions of Interest to Pakistan and Their Right Usage.” She also covered the broader themes of international border between Pakistan and Afghanistan, Kashmir dispute and regional organizations. While discussing the Jammu and Kashmir dispute, she explained the differences between Line of Control (LoC), Working Boundary, International Border, Line of Actual Control (LAC) and Integrated Check Posts (ICP) Border crossings. During the presentation, Ambassador Abdul Basit, President IPRI, intervened to further explain various terminologies, developments and agreements.  He highlighted various United Nations Security Council (UNSC) Resolutions regarding holding of plebiscite in Jammu and Kashmir. He said that according to the UNSC Resolutions, the accession of Jammu and Kashmir should be decided through democratic methods of free and impartial plebiscite. Contrary to that, 70 years of brutal occupation by India against the will of Kashmiris exposes the Indian unwillingness to comply with these UNSC resolutions.

Ms. Gulshan also discussed the objectives and achievements of various regional organizations such as Shanghai Corporation Organization (SCO), Economic Cooperation Organization (ECO), and the South Asian Association for Regional Cooperation (SAARC). It was highlighted that Pakistan with a consumer market of over 200 million people, vast business potential and a rapidly developing infrastructure, offers the SCO enormous opportunities for mutually beneficial cooperation.  As a full member, Pakistan can work with SCO in countering terrorism threat in the region; and can develop better relations with India.

Ms. Gulshan while explaining the revision of Afghanistan-Pakistan Transit Trade Agreement (APTTCA) 2010 said that the agreement was lapsed in 2015 and the draft /revised agreement is under discussion between the two countries. According to a media report Afghan Commerce Ministry Industries refused to start negotiations with Pakistan at the forum of Afghanistan Pakistan Transit Trade Co-ordination Authority (APTTCA). The scheduled talks were postponed in October and December 2017 respectively. The participants were communicated that Pakistan allows Afghan exports to India through Wagah, but this remains a bone of contention. Ambassador Abdul Basit stressed upon the fact that following its rejection of Pakistan’s offer for talks on transit trade to Afghanistan, India shipped its first consignment to the war-torn country by sea through Iran’s strategic Chahbahar Port, launching a trade route bypassing Pakistan. He further explains that India always accuses and propagates against Pakistan of harboring terrorist to undermine Pakistan’s repute in South Asian politics. 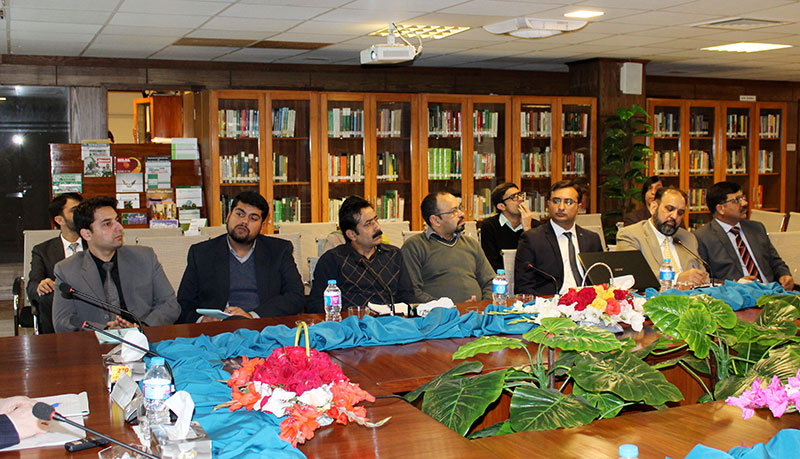 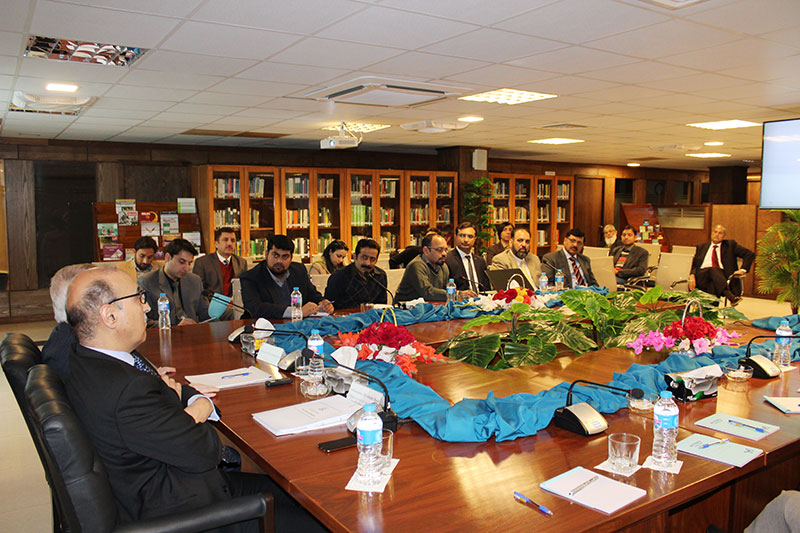 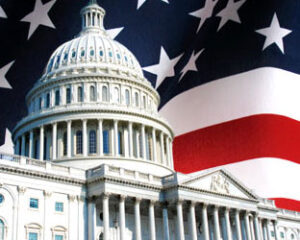 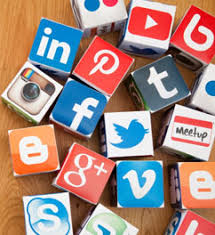