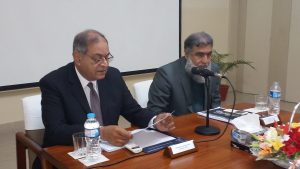 Professor Dr. Masoom Yasinzai, Rector International Islamic University, Islamabad delivered a lecture on “Balochistan unrest and its possible solutions” on August 7, 2015 at IPRI Conference Hall. Referring to the current situation in Balochistan he said that the Balochistan of 2015 was far better than the Balochistan of 2013. The federal government had taken certain initiatives such as provincial reforms under 18TH amendment, NFC award and Aghaz-e-Haqooq-e Balochistan package for the socio-economic development and for the restoration of peace in the province. He gave a geographical and historical overview of the province. He said that Balochistan held great strategic and geographical importance in the region but due to foreign intervention it turned into a war zone.
Geographically, Balochistan has Afghanistan to its north and northwest, Iran to the southwest, the Arabian Sea to the south, Punjab and Sindh to the east and Khyber Pakhtunkhawa and Federally Administered Tribal Areas (FATA) to the northeast. It is strategically and geographically one of the most important provinces of Pakistan. There are 29 districts in Balochistan. It has population of 6.6 million and an area of 147,000 square miles (45% territory of Pakistan). Balochistan is a multi-ethnic province. Baloch constitute majority in the south and east of the province. Pashtoons are second to Baloch in number. A Brahvi ethnic group is located in the Kalat region.

Dr. Yasinzai explained the ‘great game’ politics in the region and said that Balochistan was a chessboard on which major players like British and Soviet empires had played for their strategic and political interests. It was the gateway to warm waters of Arabian Sea and Indian Ocean. The USSR supported various secessionist movements in the region to reach Indian Ocean and to get the Gulf oil. The USSR supported Azad Balochistan and Greater Pashtoonistan movements during the Cold War. The British Empire had used Balochistan for communication purposes and as a buffer zone against the Russian forward strategy in Asia. During the Cold War, the US supported and trained Mujahedeen against the USSR in Balochistan and tribal areas. However, after 9/11 Balochistan and tribal areas were used as supply routes.

The speaker highlighted major and regional powers interests in Balochistan. He said that the US involvement in Balochistan was to keep a check on Chinese and Iranian influence in the region. In this regard, he referred to Lieutent Colonel Ralph, a military scholar, who in 2006 suggested a separate country with the name of Greater Balochistan that would integrate the Baloch areas of Pakistan, Iran and southern parts of Afghanistan. According to him, this was necessary for the future interest of the US in the region. Similarly, being a neighbouring country, Iran also has interest in Balochistan. Another actor India had a strategic interest to encircle Pakistan and to counter Chinese influence in the region. It is supporting terrorists in Balochistan through its consulates along Pak-Afghan border. China was another key player in the region. It had signed the Gwadar project agreement with Pakistan and wanted to enhance its regional connectivity and energy trade via Balochistan under China-Pakistan Economic Corridor (CPEC). Talking about the security threats in the province, Dr. Yasinzai said that due to Indian supported terrorism in Balochistan using Afghan soil, the writ of the state was weak in the province. He said that due to recent positive role of military, the normalcy in Balochistan was now insight.

In the end, Dr Masoom Yasinzai carried out strengths, weaknesses, opportunities and threats (SWOT) analysis. He discussed the strengths and weaknesses of the province and said that it was a trade corridor between Central Asia and South Asia. Gwadar port and its natural resources made it economically more important for Pakistan. Balochistan’s low cost manpower, huge land resources, livestock and agricultural opportunities should be utilized. Forty precious metals could be mined and mineral resources of Reko Dig could be exploited. The Mirani Dam located in the Kech District on Central Makran Range of Balochistan could irrigate 4,000 acres of land for cultivation. In the 7th NFC Award, 9% share was given for the socio-economic development of Balochistan. Gwadar, as a tri-junction connects three regions, i.e. South Asia, Central Asia and Middle East.
Similarly, Balochistan had been a victim of insurgency since 1947. The porous border with Afghanistan and Iran made it vulnerable to the happenings in the neighboring countries like war on terror in Afghanistan and the sectarian rifts. The instability in the province led to low literacy rate, unemployment and lack of business opportunities.

• There is an indispensable need to introduce genuine reforms at political, economic and social levels in Balochistan. The government must take steps to meet the requirements and interests of the Balochi people.
• The sense of deprivation and dissatisfaction among Balochis can only be eliminated through political, economic and social development of the province. The trust deficit between the centre and the provinces regarding the issues of power and resource sharing should be removed.
• There should be a change in national discourse on Balochistan. Mainstreaming of Balochistan in the national politics is required through genuine elections and by bringing the provincial political leadership on the same page. The Baloch government should be involved in the decision making process.
• Terrorism in Balochistan should be eliminated after building national consensus. Militants should be brought to table for negotiations and to address their concerns.
• CPEC would open new avenues of development for the province. Pakistan must train students from universities in Balochistan to be part of the project with their expertise in relevant fields. This would not only enhance Pak-China co-operation in the educational sector but also improve their bilateral relations.
• Gwadar port has the potential to improve the infrastructure and socio-economic situation of the province. It would create jobs and would attract foreign investment and tourism in the country. Balochistan must benefit from these opportunities, which are essential for its social development and economic prosperity.
• The Pakistan Army’s role in Balochistan has been praiseworthy. However, now the police and levies should also be empowered in the province to restore the law and order situation. Also, the positive role and the image of Pakistan Army be further promoted among local masses.
• The Government of Pakistan must take steps to improve the infrastructure and education system of the province. The access to education, quality of curriculum and female literacy are the areas that need special attention.

Balochistan has a great strategic and economic significance for Pakistan. The affairs of Balochistan must be streamlined. The political and communication gap between the centre and the province needs to be eliminated. The exploitation of Balochistan by foreign actors and militants must be prevented by political and social reforms. The government must ensure socio-economic development of Balochistan through CPEC and Gwadar port. Simultaneously, peace and development should be ensured. 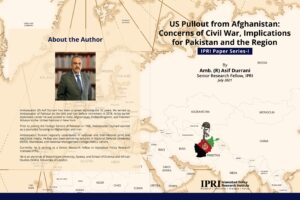