A Ce.S.I. (Center for International Studies), Rome, Italy, delegation comprising of Professor Andrea Margelletti, Chairperson, Ce.S.I, Mr. Gabriele Lacovino and Ms. Francesca Manenti visited IPRI on April 25th, 2017. The IPRI team comprised of Col. (Retd) Muhammad Hanif, Research Fellow, Mr. Muhammad Munir, Research Fellow, Ms. Aymen Ijaz, Assistant Research Officer (ARO) and Mr. Khurram Abbas, ARO. Both the teams held a joint seminar. The seminar comprised of presentations from each side (on the undermentioned subjects) and the interactive discussion:
Subjects for IPRI Team
a) Pakistan’s Counter Terrorism and Extremist Efforts,
b) Implementation of the National Action Plan
c) A de-radicalization process undertaken by the Government of Pakistan
Subjects for Ce. S.I. Team
a) How to Further Strengthen Pakistan-Italy Relations
b) Perceptions in Italy about Pakistan’s Contributions in the War on Terror
c) Italy’s Perspective on Pakistan and India’s Efforts for becoming Members of the Nuclear Suppliers Group (NSG)

Salient Points of the Seminar
IPRI Team’s Views
• Pakistan has adopted a two prong strategy to fight terrorism. Under the hard approach, military operations have been conducted in the tribal areas and afterwards a comprehensive National Action Plan (NAP) has been launched by the Government of Pakistan. As a part of the soft approach, the government has introduced vigorous development activities and economic incentives for the rehabilitation and reintegration of militants and also for the internally displaced people (IDPs).
• The Pakistani government, along with Pakistan Army has been trying to win the hearts and minds of the people through initiatives such as the Federally Administered Tribal Areas (FATA) Youth Package, overseas employment of FATA youth and infrastructure development activities by Frontier Works Organization (FWO). The government has also invested in the human resource development of the FATA region through Interest Free Micro-Lending activities and establishment of training and technical institutes.
• NAP is a national response to the threat of extremism/terrorism. It is a comprehensive document having consensus of all political parties and the military to root out the menace of terrorism from Pakistan. NAP combines both hard and soft approaches with responsibilities defined for concerned government ministries and departments, the military, intelligence agencies and it also seeks cooperation from the people of Pakistan to fight terrorism.
• A major part of the NAP is being implemented. For Example, in the 21stAmendment to the constitution of Pakistan, the Article-175 and First Schedule of the constitution have been amended to allow for the formation of military courts. The military courts are already functioning, the death punishments of convicted terrorists or their facilitators have been implemented. Nearly half of the IDPs have gone to their homes, the left over will be rehabilitated soon.
• While Pakistan has asked Afghanistan for joint fencing of the borders, it has already started fencing of sensitive sectors of its border with Afghanistan. Steps have been taken to verify civil ID cards and passports of the Pakistani people and documents of the Afghan refugees are also being verified. While some refugees have returned to Afghanistan, some are ready to be repatriated.
• To implement the NAP, some major steps are yet to be taken such as making up organizational deficiencies of NACTA, creation of a separate anti-terrorism force and formulation and implementation of reforms in the judicial and prosecution systems.
• As a part of its counterterrorism strategy, Pakistan is undertaking several De-radicalization and Rehabilitation programmes throughout the country which include: the Sabaoon Center for Rehabilitation (Sabaoon is the first ray of light at dawn), Mishal, Sparley, Rastoon, Pythom, and Heila.
• In reply to a query by an Italian scholar about the location of schools where the children of IDPs were studying (whether these schools were opened in the camps/villages or the children were staying in the hostels of the schools located at distant places), an IPRI scholar replied that all the technical and educational institutes were established in the local areas.
Italian Delegation’s Views
• Daesh is a threat to the Italian National Security. Daesh is more than a militant organization with its complete system, organization and clear strategy. Daesh is more powerful than Al-Qaeda and is committing terrorist attacks on a weekly basis in the Europe. Italy and Pakistan should co-operate to fight Daesh. As a part of coalition forces, Italian troops are staying in Afghanistan in support of the Afghan government which is very fragile.
• In response to a question on Italy’s views about Pakistan’s contributions in fighting the Global War on Terror (GWOT), the Italian scholars appreciated the commendable work of Pakistan’s military and Intelligence Agencies in the combat against terrorism. The Italian delegation members added that while the security position in Pakistan has considerably improved the security conditions in Afghanistan have worsened.
• In answer to a question regarding Italy’s perspective on India and Pakistan seeking support to become members of the Nuclear Suppliers Group (NSG), it was said that ending the proliferation of nuclear weapons is important for Italy and the European Union (EU). Italy understands the relevance of deterrence, but it supports nuclear free zone in South Asia. Italy’s views are critical to the dual use of Nuclear technology. However, Italy supports the civil use of nuclear technology for development and energy purposes. Italy wants Pakistan and India to move towards talks on nuclear free zone in South Asia.
• In order to strengthen Pakistan-Italy relations, the Italian team leader suggested that both countries’academia should play an important role in this regard. He stated that Pakistan needs to project itself in Italy and there was a need for initiating joint research projects, writing of policy papers and conducting analysis. He suggested that both the countries should enhance people to people contacts as well.
• It was opined by the Italian side that Italy and Pakistan should find joint solutions in the fight against Daesh and also work on the prospects of collaboration in de-radicalization programmes.

Conclusion
Pakistan and Italy face the common challenge of Daesh. Both states should find joint solutions to fight against the menace of terrorism. The security situation in Afghanistan has a direct impact on regional peace and stability. The Coalition forces,including Italian troops are present in Afghanistan not only to fight the terrorists, but also to support the weak Afghan government. Pakistan has made commendable efforts to counter terrorism threat along the AF-Pak border, however, more work is required from the Afghanistan side. To further strengthen mutual relations, Pakistan and Italy should initiate joint research projects, exchange scholars and enhance people to people contacts. 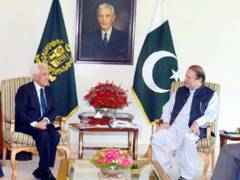