Pakistan has asked Tehran to investigate and share details of Indian spy-cum-state terrorist Commander Kulbhushan Yadav’s activities in Iran, along with those of his colleague, Research and Analysis Wing (RAW) Sub-Inspector Rakesh alias Rizwan. A two-page reference was handed over to Iranian ambassador, Mehdi Honardoost, seeking information on RAW network in Iran. Iran’s cooperation in this regard will not only improve relations between the two countries but also help reduce terrorism and unrest in the region.

Pakistan has persistently maintained that the Indian is sponsoring state terrorism, sabotage and subversion in Pakistan. Deep involvement of RAW in fomenting trouble in Pakistan has always been an open secret. Way back in 1990s, the then Indian High Commissioner had dared to threaten Pakistani Army chief that India had heavily invested in Karachi and should Pakistan continue supporting the Kashmir’s struggle (for right of self-determination), India would pay back in Karachi, and that Pakistan could lose Karachi.

For reasons best known to the successive governments, Pakistan has always been shy to take up the matter bilaterally with India and highlighting firmly it at international forums. First departure was made by Pakistan during NAM summit 2009, in Egypt when a dossier containing information regarding Indian subversive activities in Balochistan was handed over by Pakistan to India at prime minsters’ level. Pakistan later handed over three dossiers to UN Secretary General in September 2015.

Though India has always maintained a posture of denial, its strategy has been multi-pronged covering all major urban centres of Pakistan. RAW has made deep penetrations in numerous ethno-sectarian entities of Pakistan. Indian interest in Balochistan redoubled with surfacing of China Pakistan Economic Corridor (CPEC). Indian Prime Minister openly announced in China that CPEC was not acceptable to India. Soon after a special fund worth US$ 300 million was setup to propel a project to disrupt CPEC under the direct supervision of Indian national security advisor (NSA) Ajit Doval.

It is in this context Kulbhushan Yadav was found working, undercover, in Balochistan to mobilize men and material to attack Pakistan’s costal installations specially the port infrastructure. Agent’s revelations during investigation brought forth confirmation about expanse and extent of RAW involvement from an insider Indian source.

Yadav’s activities were nothing short of state-sponsored terrorism. In his confessional the video, Yadav appeared relaxed as he acknowledged carrying out a long list of operations in Baluchistan and Karachi. He revealed that he is a naval officer, with six years to go before retirement. He confessed that he had been involved in a variety of activities meant to destabilize Pakistan. Yadav has stated that he was directly handled by Indian NSA, RAW chief and a Joint Secretary of RAW, Anil Kumar Gupta. As usual, India has denied that Commander Yadav is an intelligence operative. Yadav said he was tasked with meeting Baloch separatists for carrying out activities of “criminal nature, leading to the killing or maiming of Pakistani citizens…There are finances which are led into the Baloch movement through various contacts or ways and means.” RAW’s activities, according to the Indian spy, centred on the ports of Gwadar, Pasni, Jewani and other installations in Balochistan. These activities were aimed at trying to create a “criminal sort of mind-set within the Balochistan liberation (lobby) and lead to instability within Pakistan”.

Pakistan did well by releasing video tape of the RAW Yadav’s confession. This would make those elements in Pakistan rethink their approach of faulting Pakistan for not improving relations with India. Hopefully, the issue would not end at release of the video and Pakistani leadership would continue raising such issues forcefully with India and members of the international community.

Also, Investigation into Pathankot is proving to be another Achilles’ heel for India. Through restrictive cooperation with Pakistan’s visiting joint investigating team (JIT), India has demonstrated that it is not at all interested in finding out truth about the Pathankot terror attack and is only interested to exploit the incident as a tool for Pakistan bashing. India did take the joint investigation team to the Pathankot air base, where they were allowed access only for a few minutes.

In all good faith Pakistan had given an unwavering commitment to India to help it in the investigation process to unmask the real culprits and masterminds of the attack. However, it appears that Indian side has some skeletons in the cupboard which it is afraid of getting exposed. May be this attack was also a false flag operation to disrupt foreign secretary level talks.

Pakistan wanted to bring out the real truth behind the whole incident. However, the Indian side did not reciprocate, rather it maintained its obstinacy. The JIT was provided scanty evidence which is not sufficient to complete the investigation. The JIT wanted to talk to the personnel involved in the operation against terrorists and also visit the whole vicinity of the airbase but the Indian side denied the JIT access to its personnel as well as the main areas in the airbase.

Pakistani investigators had asked for the recordings of the telephonic calls of SP Salwinder Singh, his wife and related individuals along with contacted numbers and copies of the three First Investigation Reports (FIR) that were registered after the incident but this information was denied. Furthermore, sketches of the perpetrators, Closed Circuit Television (CCTV) camera footage, duty registers of the Border Security Forces (BSF) officers, details of bank accounts, service records, post-mortem report of the driver who died in the car accident at the time of the incident and the FIR report of that very car’s snatching have also not been provided to the investigation team. Post-mortem reports of the alleged terrorists involved in the attack, their DNA reports, phone records and information regarding the base commander of Pathankot airbase have also not been made available to the Pakistani investigation team in India.

Narratives of the Indian government and the BSF regarding the attack contradict with one another. According to the former, the intruders that attacked the base infiltrated into India from Pakistan through a border near Beas River whereas BSF is of the view that no one crossed the border from the particular area mentioned by the government.

As per reports issued by Indian authorities, the terrorists decapitated a Sikh after infiltrating into India but left an SP, his driver and cook in order to make sure that some individuals who witnessed the event remain behind. Reports by Indian side further state that the terrorists entered inside the Pathankot airbase after climbing the 10 feet tall walls with the help of ropes. However, no ropes were retrieved as evidences. The Indian government also dismisses claims of insider to the terrorists.

Perception is snowballing that Indian intent is not to provide any substance to Pakistani investigators for moving further on Pathankot terror incident as it was nothing else but just a drama, created by Indian Intelligence Bureau (IB) to dent Foreign secretary level and NSA-level Talks. Indians are doing everything to hide what actually happened at Pathankot. Pakistani investigation team has handed over a detailed request for Assistance for Collection of Evidence. No fresh evidence has been shared by the Indian side except minor things. During discussion on proof of infiltration, Indians have replied that they do not have any credible proof about border fence breaching. Indian side has admitted that data / photos / emails about attackers had not been collected through any official or intelligence source but internet.

Under the circumstanced, JIT may not be able to complete the investigations; this suits India as it would continue to use the incident for maligning Pakistan.

Pakistan should take-up the details of handiwork of RAW at all international forums and strengthen its lobby, through diplomacy, for formally approaching monitoring and implementation committee of UNSC Resolution 1540 for declaring India a state sponsoring terrorism.
The Nation April 04, 2016. 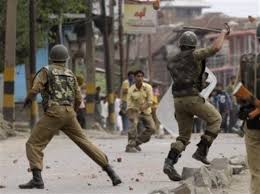