As nation mourns the loss of precious lives in a cowardly terrorist attack on a PAF residential camp at Badaber, preliminary findings reveal trails of attack leading to Afghanistan. Apparently attack was planned, controlled and executed from Afghanistan. Islamabad is contemplating to present hard evidence to Kabul in this context. Pakistan will convey to Afghanistan that it will no more tolerate such attacks emanating from its soil. Apparently this attack was aimed at, once again, disrupting the next round of reconciliation talks between the Afghan government and Tehreek-e-Taliban Afghanistan (TTA), which appears round the corner.
Relations between Pakistan and Afghanistan have deteriorated during recent weeks following a sudden spike in violence in Afghanistan. President Ashraf Ghani, who earlier praised Pakistan for helping his country strike a peace deal with Afghan Taliban, had publicly accused the Pakistan’s security establishment of being behind the attacks in Afghanistan. Angered President Ghani has said that his country will now not seek any help from Pakistan for brokering a peace deal. The Badaber attack is likely to further complicate relations between the two countries.
Notwithstanding, Islamabad is still seeking a cooperative relation with Kabul to collectively fight the menace of terrorism. Two top American commanders visited Pakistan in the recent weeks; Chief of US Central Command General Lloyd Austin and the US/NATO commander in Afghanistan General John Campbell. John Campbell was accompanied by the acting American Special Representative for Afghanistan and Pakistan Jarrett Blanc. Visitors discussed Afghan peace talks with Pakistan’s army chief, General Raheel Sharif, focused at jump-starting the stalled process. Prime Minister Nawaz Sharif would also like to see the peace talks resume before his forthcoming visits to the UN and the White House.

Charisma of Mullah Omar is so powerful that he continues to have impelling influence on the rank and file of TTA, even two years after his death. However, dust is settling down over the issues that cropped up after his demise; now the life is returning to normal. TTA has swiftly resolved its leadership issue and Mullah Akhtar Mansur has emerged as a near consensus leader. Mullah Omar’s family has also pledged allegiance to him. The succession dispute could have caused a split in the conglomerate; and in that case it would have been difficult to carry forward the peace process. Afghan Taliban leadership has brilliantly succeeded in arresting the dissent within the rank and file of the TTA. Mansoor displayed patience, tact and pragmatism in consolidating his leadership. He did not let loose violence on his detractors and held the conviction that better options existed. He even reached out to senior Taliban commanders in the Middle East to seek credibility to his leadership.

Now Mansoor is likely to return to negotiating table, Kabul is also likely to join after making few noises. Ghani needs to set his own house in order. Who would know better than him that despite the claims to the contrary, Afghan National Security Forces (ANCF) are not in good shape and war is a non-option for the incumbent Afghan government. Ghazni jailbreak has not only embarrassed Kabul government but also was an impressive display of power by the Taliban. Taliban continue to keep the Afghan army on its toes, engaging it in a war of attrition; ANSF casualty rate is alarmingly high and is on the rise. At the same time, the war lobby in Kabul is on ascendancy, beneficiaries of status quo via continuation of ongoing shady war, like Rustam Dostum, have again sprung into action; such elements could happily become Indian proxies for keeping the pot boiling.

Taliban are busy in a spree of show of force to reassert their dominant status for two reasons. Firstly, to shore up support base from erosion at the hands of the Islamic State; and secondly, to pressure the Afghan government to make concessions when the peace talks resume. To be fair, attribution of recent acts of violence in Afghanistan to Daesh (IS) may not be an accurate assessment. Though, there are reports of presence of this outfit in Afghanistan, it is unable to sustain itself due to sharp decline in foreign funding, and there is no footprint of this group in Pakistan.
Pakistan has invited the new leadership of the Afghan Taliban to re-join the reconciliation process. “We hope that TTA will give up violence and join intra-Afghan dialogue for peace in Afghanistan. Pakistan will facilitate the dialogue, as before,” foreign office spokesperson said. This approach, of putting horse before the cart, is essentially a non-starter. Prudence demands that instead of preconditioning reconciliation with termination of violence, initial phases of negotiation should aim at working out the modalities of renouncing the violence culminating at a cease-fire. This would need a whole range of actions to create conducive environment through Confidence Building Measures (CBMs), like exchange of prisoners. Once the warring factions gain each other’s trust, sustainable cease fire would be a logical outcome.
Prime Minister’s Adviser on National Security and Foreign Affairs Sartaj Aziz travelled to Kabul on September 04 to deliver a key message calling for the resumption of peace process. However, Afghanistan has yet to respond to Pakistan’s proposal. Sartaj Aziz has stated that efforts are being made for resumption of reconciliation talks between the Afghan Taliban and the Afghan government. Aziz added that it now depends on the Afghan government, and they can resume the process if they are willing to. While Afghan government has all the right to choose the option of handling the peace talks unilaterally, such an effort is not likely to lead anywhere, because Afghan peace process is a complicated enterprise that needs robust guarantors firstly for sealing a mutually acceptable agreement, and later for its successful implementation at political and military levels.

Pakistan’s role in facilitating the reconciliation process has always been considered crucial. At the same time Pakistan has all along been cautioning about the limits of its influence on the Taliban. Apparently, Pakistan and Afghanistan have once again agreed “to restore trust, end the blame game against each other and create a positive atmosphere,” Aziz said about his meeting with Afghan President Ashraf Ghani. Pakistan has confronted Afghanistan with ‘compelling’ evidence of how its security forces have successfully dismantled the Haqqani network from FATA. Pakistan’s assessment is that majority of terrorist attacks in Afghanistan and Pakistan are now being planned from within Afghanistan.

As of now, American priority is resumption of Murree peace talks; the US is no longer pressing for a Pakistani military crackdown on the Haqqani Network, which was indeed an unrealistic demand ab-initio. Afghanistan shall also figure in the agenda of talks between Obama and Chinese President Xi Jinping during his state visit to the US. This would add to a coordinated US-China-Pakistani effort in the days ahead to put the Afghan peace talks back on track. Three key regional powers neighboring Afghanistan (China, Pakistan and Iran) are on board. Contacts between the US and Iran during nuclear negotiations have begun to produce more areas of cooperation including Afghanistan, where there is clearly emerging alignment of interests between the US and Iran.

Pakistan’s policy on Afghan peace process is rather clear. Pakistan has always been ready to facilitate the Afghan-led and Afghan-owned peace process because it feels that peace in Afghanistan is important not only for the people of Afghanistan but also the people of Pakistan and the region. In this regard, the success of Zarb-e-Azb in eliminating terrorists is well-known to the world. Afghan government should cease the opportunity and rejoin the peace process.

Disclaimer: Views expressed are of the writer and are not necessarily representative of IPRI policy 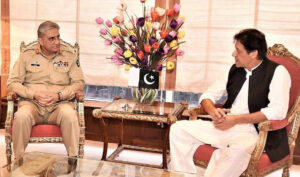