There have been a series of exchanges between Pakistan and the United States in the past few weeks. Many questions are lingering, given the visible freeze in the bilateral relationship, especially after the withdrawal of the American and NATO troops from Afghanistan. Does it mean that the ice has started melting between the two countries? If so, what may have prompted the US to revert to Pakistan? How a ‘reset’ between the two countries can shape up will be a subject of intense discussion in the coming days.

After a gap of over two years due to Covid-19, several South Asian specialists from the US were present last week in Islamabad to explore the new avenues of bilateral cooperation between Pakistan and the US. Scholars of think tanks such as Wilson Centre, Stimson Centre, United States Institute for Peace (USIP) and the Quincy Institute have extensively interacted with their Pakistani counterparts and universities. It was refreshing to see that the American scholars were more forthcoming than their administration in recognising the significance of Pakistan in the region.

On more than two occasions, the American scholars reminded their Pakistani audience that former Prime Minister Imran Khan’s attribution of ‘breaking the shackles of slavery’ remarks on the Afghan Taliban’s triumph did not go well with the American administration. Implied in the message was that President Biden was not comfortable with Imran Khan while a reset with the new government was possible. The American researchers recognised that despite certain deep-rooted misunderstandings displayed by the former President Trump and current President Biden about Pakistan, prudence demands looking at Pakistan because of its merit rather than looking at it from the Indian or Afghan prism.

It was emphasised that while cooperation in the military field may have been curtailed in the recent past, the two countries may explore other avenues for collaboration. For instance, Pakistan is the largest recipient of the Fulbright scholarship programme in the world, which would effectively contribute to the socio-economic development of Pakistan. Pakistani students prefer American universities; currently, over 12000 Pakistani students are in the US for higher studies despite the high cost of education in the country and other expenses. However, China has become the number one destination for Pakistani students. In 2019, 28,023 Pakistanis were studying in Chinese universities. The surge in Pakistani students rushing to China indicates the alternative Pakistan can always exercise should the American administrations become difficult with Pakistan.

American scholars admitted that after the withdrawal from Afghanistan, Pakistan fell in the low category of priorities, but it did not mean a complete cut-off. Irrespective of the alternatives available to Pakistan, the institutional memory of the two countries, especially their establishments, realise that the Pakistan-US relationship cannot be divorced completely. Cooperation in areas such as climate change and water management are vital issues with tremendous potential to mitigate the challenges Pakistan has been facing despite its negligible contribution (0.8 percent) at the global level. Similarly, the agriculture, IT and services sectors have great potential for Pakistan to make a mark in the American market even without entering into a Free Trade Agreement (FTA). Therefore, farsightedness demands that a persistent engagement in all fields would be a win-win situation for both countries.

The most visible aspect of American engagement that made headlines last week and was highlighted by American scholars was the US decision to provide Pakistan with a $450 million package for what the Pentagon has called the “F-16 Case for sustainment and related equipment”. This is the first American military assistance package to Pakistan after the Trump administration ended defence and security cooperation with the country in 2018 after former President Donald Trump’s diatribe against Pakistan, accusing it of giving only ‘lies and deceit’ for the billions of dollars that the US had ‘foolishly’ given it.

Not surprisingly, Indian annoyance with the American decision was echoed in Defence Minister Rajnath Singh’s Twitter account. He said that he had ‘conveyed concerns’ to his American counterpart Lloyd Austin on the US decision. However, the Department of Defence readout on Austin’s call with Singh did not mention Indian concerns on the F-16 package. According to the Indian Express’ Nirupama Subramanian: “As it demonstrates ‘strategic autonomy’ to engage with every side — Quad one week, and Russia and China the next at the Shanghai Co-operation Organisation (SCO) in Samarkand — India appears determined to swallow its disappointment. After all, if New Delhi can stay away from zero-sum games, work around Western sanctions to buy oil from Russia, and keep friends in all camps, what prevents the US from pleasing a non-NATO ally?” This does not mean that the US-India strategic partnership would come under strain anytime soon, but it shows that the US has more options than India in choosing partners.

The US’s withdrawal from Afghanistan has been unpleasant for the Biden administration, particularly its military establishment. Since the withdrawal decision enjoyed bipartisan support, President Biden acted without hesitation. However, a late realisation expressed by many former officials in the Republican and Democratic administrations was that, geographically, the US had been completely ousted from the region unless it mends fences with Pakistan.

Secondly, the Pakistan-China strategic partnership has withstood the test of time. Hence Pakistan would still offer a window of opportunity to China should the US hit the blind alley. Threatening Pakistan with sanctions would not work as Pakistan has been the most-sanctioned ally in the past and has the experience of surviving all odds. A sanctioned Pakistan performed much better in military and economic fields than looking for favours in various western capitals.

Thirdly, the Ukrainian war may have initially come as a boon for the warmongers in the US administration and some of the NATO allies. However, the rising death and destruction and Russia’s gradual gains are taxing NATO coffers. The quality of international support has not given much confidence to the American and European partners. In contrast, Russia has not only gained diplomatically, but accrued windfall profits due to rising oil and gas prices. The US’s attempts to tarnish China have backfired, while Russia and China have emerged as formidable allies at the regional and global levels. The recently held SCO summit in Samarkand, Uzbekistan, must have given ample signals to the American and NATO strategic community about how powerful this alliance can be.

The preceding factors and Pakistan’s geographical location have once again reinforced the argument often exchanged in the academic and strategic circles in Pakistan that the rulers of Pakistan may have failed the country in the past, but its geography has always saved the country. Hopefully, its rulers will also realise that despite huge economic problems, the country has the potential to bounce back. Meanwhile, the possible ‘reset’ with Washington needs careful handling with the utter realisation that the country would adopt a neutral course while prioritising peace in the region. A normal US relationship, even without military sales, should serve Pakistan’s geopolitical and geo-economic interests.

Note: This article appeared in BOL, dated 25 September 2022.
Disclaimer: The views expressed in the article are of the author and do not necessarily represent Institute’s policy. 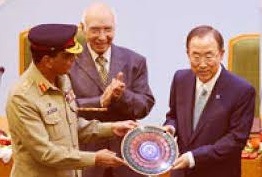