Is it a coincidence that the whole of South Asia is in turmoil? India is in the grip of Hindutva fever where the lives of minorities, especially those of Muslims, have become hellish. Afghanistan remains under the worst kind of humanitarian catastrophe after the ascension of the Taliban. Adding insult to injury, the religious militia is harsh on women by issuing dictates about their dressing, education and employment. Sri Lanka is in turmoil because of the economic meltdown, with its prime minister having to resign. In Pakistan, we have internal political unrest following the fall of the Imran Khan government in a vote of no-confidence, which Imran Khan believes is foreign-inspired. Cumulatively, inner turmoil in these countries are plunging the entire region into a basket case.

In South Asia, the situation in India seems  precarious as the life of over 200 million Muslims has become a living hell. Former Minister of State for External Affairs, Shashi Tharoor, aptly summarized the emerging ethnic scene in India in the India Today magazine on April 22. The author has narrated three shocking episodes coming to his attention in recent weeks. These incidents are worth repeating:

a. The first is about a Lebanese businesswoman by the name of Nour who has been a frequent visitor to the Indian state of Gujrat for handicrafts and jewellery business. Her name, Nour, would evoke a friendly welcome in the past from the Indians who would tell her: “Oh, what a lovely name! We have the same name in India! We know it means ‘light’!” Today, she says, things have changed. When she says her name is Nour, she gets an immediate reaction: “Oh, you are Muslim?” The question, and the tone of the query, say it all. She is less sure now that she will be coming back as often.

b. In the second episode, a former Indian Ambassador in Afghanistan prompted an Afghan surgeon friend to send his wife and children to India to escape the wrath of the Taliban, which he did. But within a year, he was shocked to learn that the children’s playmates in their apartment building announced to them, “Our parents told us not to play with you because you are Muslim.” While regretting it, the former Indian Ambassador told his Afghan friend to relocate his family either to Dubai or London.

c. In the third episode, an Indian at the United Nations, an experienced peace negotiator who had served in many trouble spots across the Middle East, was summarily booted out of the meeting with an Arab militant when the latter came to know that his interlocutor was from India. The so-called militant scoffed at the Indian-born UN official as his country was maltreating the Muslims.

While the Americans have left the country in Afghanistan, so-called independent Afghanistan under the Taliban is beholden to foreign aid. The humanitarian crisis is so grave that 95 percent of the country is below the poverty line, and if the UN’s call for $ 4.5 billion in aid is not heeded in time, the country may plunge into chaos and force the people to migrate. Again, the Taliban’s harsh governance makes the donor countries sceptical about helping mitigate Afghanistan’s humanitarian crisis. Taliban’s dictates of banning girls’ secondary education and imposition of a strict dress code, including compulsory burqa, is causing concerns in the international community. Noble laureate Malala Yousafzai recently took a swipe at the Taliban regime over the regressive laws imposed against women, saying they “want to erase girls and women from all public life in Afghanistan.”

In Sri Lanka, the deepening economic crisis has spiralled into massive protests causing the resignation of Prime Minister Mahinda Rajapaksa. A severe shortage of foreign currency has left Rajapaksa’s government unable to pay for essential imports, including fuel, leading to debilitating power cuts lasting up to 13 hours. Ordinary Sri Lankans are also dealing with shortages and soaring inflation after the country steeply devalued its currency last month ahead of talks with the International Monetary Fund (IMF) for a loan programme.

In the interim, Rajapaksa has also sought help from China and India, particularly assistance on fuel from the latter. A diesel shipment under a $500 million credit line signed with India in February will arrive soon. Sri Lanka and India have signed a $1 billion credit line for importing essentials, including food and medicine, and the Rajapaksa government has sought at least another $1 billion from New Delhi. After providing the CBSL with a $1.5 billion swap and a $1.3 billion syndicated loan to the government, China is considering offering the island nation a $1.5 billion credit facility and a separate loan of up to $1 billion.

In Pakistan, former prime minister Imran Khan’s government was voted out in a no-confidence motion. He is critical of the establishment for his downfall. Although a coalition government has been sworn in, it faces enormous economic problems accumulated during Imran Khan’s tenure. The new government headed by Prime Minister Shehbaz Sharif finds it challenging to control rising inflation, food prices and depreciating currency. The ruling coalition may be cursing their decision to oust Imran Khan’s government prematurely when it was already heading for a crash.

Imran Khan’s accusation that the US has caused his government’s downfall is another sore point in the ongoing debate in the country. His detractors accuse him of defaming the army by using US’s interference as a pretext. He cannot fathom that during the no-confidence motion, the army stood neutral. His confrontationist posture, especially his diatribe against the army generals, could turn ugly given the massive crowd he is pulling in the urban centres. He has threatened to storm Islamabad by May if his demands for immediate elections were not accepted.

Although, for the time being, Bangladesh is peaceful, mainly due to positive economic indicators, the volatile nature of that country’s politics can turn ugly on the slightest pretext.

The purpose of narrating the above scenarios in South Asia was to draw attention to the misfortune of South Asia, which, despite having two nuclear powers, represents the highest number of poverty-stricken people in the world. This is the only economically least integrated region mired in communal hatred and unresolved disputes. None of the countries in this region has produced leaders who could demonstrate statesmanship and adopt a result-oriented approach to resolve bilateral disputes and make common causes on issues such as the Ukraine crisis, humanitarian catastrophe in Afghanistan and greater connectivity within South Asia and beyond.

Note: This article appeared in Bol, dated 12 May 2022.
Disclaimer: The views expressed in the article are of the author and do not necessarily represent Institute’s policy. 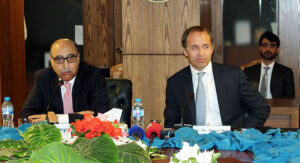