Speak Out and Be Heard

Time for India and Pakistan to focus on the dividends of geo-economics with the powers that be.

(The tragedy {of our times} is that to this day; No one has spoken and no one has been heard)
That perfectly epitomizes India-Pakistan relations. Seven decades down the lane, both the neighbours
haven’t sorted out the modus operandi to interact. They hardly speak to each other. Their culture of
bilateralism is based on ‘preconditioned’ reciprocity. Politics precedes reason! Thus, they have only
amassed a plethora of confrontational issues, and the territorial dispute of Kashmir is just the tip of the
iceberg.

But as the proverb goes: there is always light at the end of the tunnel. Power politics in the region, and
beyond, has pitched an opportunity of sorts for both India and Pakistan to revisit their dunderhead state
of relations; start talking and rewrite their ties in conformity with realism.

The buzzword these days is geoeconomics. The new dawned realisation is that both have played enough
to the gallery, and now is the time to mend the fences. As the euphoria of talks between India and
Pakistan gathers momentum, let’s analyse in a kaleidoscopic manner as to what is the ground reality
and what factors are influencing the change of heart. If at all!

Though India and Pakistan are in a war of attrition, the good point is that their deep state is awake.
There is a nexus that keeps interacting behind the curtains, especially with power-brokers in
Washington, Beijing and London, to name the least.

This confidence building mechanism apparently draws its inspiration from the Chinese school of
thought. It lays stress on ‘furthering unlimited cooperation’, irrespective of severe differences at hand.

New Delhi and Islamabad, it seems, have been taught a lesson or two. But how prudently they go on to
realise it in realpolitik domain is anybody’s guess!

As China and the United States celebrated their 50th year of Friendship, former US Secretary of State
Henry Kissinger had a tale to tell. He and his likes, who endorse laissez-faire in statehood, are of the
view that the war of nerves cannot go on for ages. There is always a time for rapprochement and
reconciliation.

Kissinger did the same at the zenith of his prestige, and in the hey-days of Cold War. He tapped China
as he frequented through the mountains of Nathia Gali, courtesy Pakistan, and won it over
diplomatically. Since then US adheres to One-China policy. Today, irrespective of the ongoing trade
war between the two countries, China retains trillions of dollars of investments in the US, and
Pentagon stops short of firing even a single aerial shot in the Asia Pacific – despite its hegemon.

Are India and Pakistan learning anything from it? Not very sure! But a couple of developments have
changed the entire paradigm of their bilateralism. They are: Somersaults in the Middle East wherein
Israel has emerged as an ally of Arabs, the staggering $900 billion investment of China on the Belt-and-
Road project, as well as in Iran and Africa; and last but not least the newfound Quartet in Asia-Pacific led
by Washington.

India and Pakistan are, thus, forced into a talking mode – notwithstanding their bilaterally politicised
reservations. This is the pinnacle of geoeconomics of which India and Pakistan constitute a Pivot. They
sit alongside 2.5 billion people at the crossroads of Central Asia and China, which incidentally is
emerging as the biggest and robust artery of business.

At least three big-ticket trillion-dollar projects such as the Turkmenistan-Afghanistan-Pakistan-India
(TAPI), Central Asia-South Asia (CASA-1000) power project and the China-Pakistan Economic Corridor
(CPEC) won’t be able to see the light of the day, if India and Pakistan do not come to terms. The bottom-
line is that they need to bury the hatchet and relive in peace.

So the ball goes rolling. Reports say undercover emissaries from India and Pakistan started sharing their
notes — who had been meeting in wilderness all these years since the Agra fiasco in 2001. Such a
clandestine meet reportedly took place in January between top intelligence sleuths in Dubai. Though the
UAE is tightlipped, something is cooking, certainly.

The back channel talks and subsequent meeting of Flag Commanders led to cessation of fire along the
Line of Control (LoC) dividing Kashmir. Luckily, the ceasefire is holding. The governments, however, are
in need of a roadmap to cement their mode of understanding. The pivot is economics, in an era of
alliances pristinely centered on geoeconomic connectivity.

Until and unless the impasse in the form of blockades and refusal to trade and transit across their
borders is done away with, CPEC, ECO, Shanghai Group and many such geoeconomic-mergers will
remain a non-starter.

The million dollar question is: Who will further the theory of connectivity in an environment of bias
and prejudice? In such a premise, Pakistan Army Chief General Qamar Javed Bajwa’s call to improve
ties with India was based on the clear-headed realisation that neither country can afford an unending
hostility. This is statesmanship. Pakistan has led from the front. General Bajwa, nonetheless, clearly
told the world at large that Kashmir is, and will remain, a cardinal issue; “but it can wait till other
contentious issues are sorted out, bilaterally.”

That’s the way to go. Pakistan is addressing the regional connectivity issue by offering its services on
two fronts: heading in good-faith towards India and helping Afghanistan come to terms with itself.

So what’s the game plan? The Indian Prime Minister and his Pakistani counterpart exchanged cordially
worded letters for the first time since August 5, 2019, when New Delhi scrapped the special status and
autonomy of Occupied Kashmir, pushing India-Pakistan relations at the brink of a certain war. That was
tantamount to melting the ice.

And then, of course, few blunders and hiccups followed as is usual in our uncultured way of doing
politics. Four of the ministries in Pakistan, out of blue, expressed their willingness to import sugar and
cotton from India. That move was, nonetheless, scrapped within a day by the Federal Cabinet with
Prime Minister Imran Khan in the chair! Why? Was that a carrot-and-stick message to someone across
the borders?

Yet the spirit of largesse is at work. Policy-makers hint at going soft as both the flanks of Kashmir go on
to hold elections this year. The purpose is to scale down hostility, and enable people on both sides of
the divide to once again repose their trust in an amicable settlement. Restoration of Internet services in
Jammu &amp; Kashmir and the release of political prisoners have already come as welcome gestures from a
seamless politburo at work in New Delhi.

Not very sure as to who has scripted the draft, but it makes sense in an era of volatility and extremism. If
all goes well, it is hoped that both the High Commissions, respectively, will go back to normal
functioning. Presently, they are working at less than half their capacity.

Let’s cast the dye now. One of India’s most eulogized diplomats, Satinder Lambah — who also
represented Prime Minister Manmohan Singh in back channel talks from 2005 to 2014 — has called for
secret talks between Gen. Bajwa and Indian National Security Adviser Ajit Doval. He wouldn’t have gone
public without a purpose.

Lambah still believes that the accord on Jammu and Kashmir negotiated by him during President Pervez
Musharraf era is valid. He also says New Delhi wouldn’t mind granting “full statehood” status to Jammu
&amp; Kashmir. What does that mean in the Westphalia theory is yet to be accounted for!

In lieu, he says, Islamabad had also agreed in 2014 to grant Most Favoured Nation (MFN) status in trade
to India. Are Pakistan and India picking a thread from there is too early to estimate.

There is renewed euphoria on Pakistan’s western borders, too. Pakistan opened up its third border
crossing with Iran at Mand Rag area, just six months after inaugurating the second crossing point at
Ramadan-Gabd border in Gwadar district. Taftan-Zahidan is the first link between both the countries
that share a 900km-long border.

Pundits of geopolitics say the Ring Road built under CPEC is ready, but inoperative, till Wagah which
could grant connectivity to India via Pakistan till Central Asia. A political nod is awaited, and the Chinese
too are eager to see that happen.

The good point is that the world community has stepped in to softly mediate and redress the irritants.
They are, indeed, acting as ‘honest brokers’ and ‘pressure valves’. If that works out, it is estimated that
regional trade will shoot up to $100 billion per annum; soar tourism in Pakistan by $30 billion yearly; and
at the same time spring into full-blown momentum grandiose projects across the region.

That can only be possible if all stakeholders keep on interacting, and open new vistas of cooperation in
conformity with their inherited geography. Speak out and be heard is the mantra.

Note: This article appeared in The Truth International Magazine, 15 May 2021.
Disclaimer: The views expressed in the article are of the author and do not necessarily represent Institute’s policy. 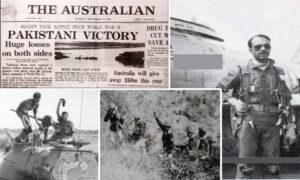 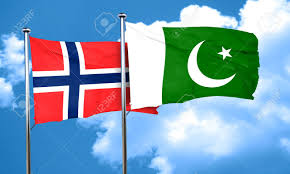 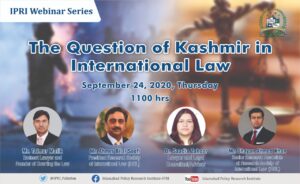 Webinar on The Question of Kashmir in International Law