Anocracies are countries in transition towards full democracy after having experienced non-democratic rule in the past but are not fully committed to democratic practices. These countries have a high probability of experiencing intra-state conflicts and violence according to scholars like Gehem and Schellekens.

In her piece in Human Rights Quarterly, Helen Fein points out that “divided elites, inequality, and violent challengers who threaten the legitimacy of the current social order” imperil the peace and stability of a polity trying to make a transition from an autocracy to an anocracy. Examples include countries like Libya, Yemen, Egypt, Cambodia, Thailand, Congo, Somalia and Sudan. Instability in anocracies, unlike in fully consolidated democracies or repressive authoritarian states, emerges from the absence of political stability and strong democratic practices.

Anocracies experience the loosening of state controls and rule of law enforced earlier through a strong authoritarian state apparatus because of a lack of political consensus in society over democratic norms of accommodation, accountability and rule of law. Anocracies are normally afflicted with polarization and deprivation in society that act as drivers of conflict.

When the main political protagonists do not practise democratic practices within their political parties and rule with fiat, the political discourse degenerates into a hyper polarized battle of narratives. Societies that score low on indices of literacy, civic sense and human development lack the discipline and political maturity to overcome the socio-economic challenges and are susceptible to the domination of a politico-economic aristocracy.

This aristocracy, instead of acting in a noblesse oblige spirit, widens the existing divide to protect its interests. When an overdeveloped state took over the governance reins, edging out political forces in the initial few decades of the country’s post-colonial journey, it generated economic momentum sans distributive justice. This resulted in a rise in inequality and polarization in society, leading to a yearning for a strong leader who could act as a saviour or the messiah for the underprivileged.

In the 1970s, Zulfikar Ali Bhutto emerged as a champion of the deprived and the destitute with his catchy slogan of ‘roti, kapra aur makan’. He introduced the term ‘Islamic socialism’ as his political philosophy. But his impatience with dissent and intolerance of contrarian views led him into an authoritarian trap as instead of devolving political power, he started hoarding it.

Bhutto was confronted with a highly charged, deprived segment of the population that wanted to reclaim its place after decades of exploitation by the politico-economic elite. While he ignited the fire of political awareness for the rights of the dispossessed, he failed to tell them about their obligations. This was because of two factors: one was the lack of self-discipline in society; and the second was the presence of extractive elite that never wanted to let go of its privileges. The result was a desire for a messiah among the people and a fear among the elite to protect their lofty perch.

The decade of weak democracy in the 1990s further fuelled the people’s desire for a magic bullet for good governance. When another charismatic authoritarian ruler Gen Pervez Musharraf gave semblance of governance stability, the image of a well-governed nation further cemented the concept of a messiah in public imagination.

The post-Musharraf democratic governments inherited the same two problems that led to Bhutto’s failed attempts at democratic consolidation. The only difference was that the extractive elite had further penetrated the mainstream political parties while the downtrodden classes had further sunk into despondency, increasing their vulnerability to populism and demagoguery.

The much-touted third force, in the shape of the PTI, was brought to power with hopes of entering the true dawn of an inclusive polity, after the terms of the big political parties turned out to be a dangerous mirage. People and powerbrokers – tired of the shenanigans of the two mainstream parties representing the interests of the country’s elite – thought that a cricket hero could apply his impressive cricketing skills on the governance front too.

All hopes were dashed as the PTI government started governing in an unsatisfactory manner. Imran Khan’s frank admission that his party had not prepared well for the governance challenges indicated the capacity deficit of a political party that came to power on the promises of introducing genuine governance reforms. The egotistic leadership made some unbelievable selections for key cabinet and administrative slots. Instead of strengthening democratic institutions, reliance was placed on legislation through ordinances, bypassing parliament. The cult of the promised messiah was cultivated and populist narratives kept peddling. Populism that thrived on promises like 5 million houses and 10 million jobs for the poor turned out to be a farce when confronted with the stark realities of the state.

The perils of anocracy, which include weak democratic institutions and interference by non-democratic forces, were not fully understood by the PTI government. Instead of strengthening state institutions through genuine reforms, the party relied on non-democratic institutions for tackling political and governance challenges. These perils led to political conflicts and the widening of internal fissures in society. In the absence of economic amelioration of the have-nots, this fuelled public discontent. Instead of addressing the root cause of the problem, Imran Khan resorted to the one-prop strategy of accountability to salvage his declining popularity. When accountability came up against an independent judiciary, frustration mounted, resulting in conflict with institutions.

Populist slogans, bad governance, and narcissism exacerbated the perils of anocracy that led to regime change. The big difference this time is that a political party is actually hoping for some sort of state interference in politics. This desire is the biggest peril of an anocracy, and all democrats must pay attention to this danger if they want the country to blossom into a democracy.

Note: This article appeared in The News, dated 11 November 2022.
Disclaimer: The views expressed in the article are of the author and do not necessarily represent Institute’s policy. 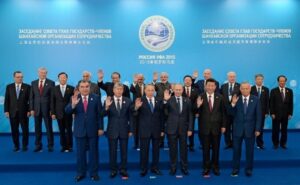