On February 10, Iran celebrated the 43rd anniversary of the Islamic revolution. This revolution not only jolted the entire Middle East, but ousted the United States from the country, considered to be the bastion of American dominance in the region. It was a sudden shock for the Americans who could not anticipate the fall of the monarchy so soon, especially at a time when Iran served as the “policeman” of the Middle East and the US maintained the largest spy mission in Tehran. The American researchers were at a loss that after Mossadeq’s removal in 1953, the U.S. intelligence network was strengthened substantially in Iran to avert any surprises. Still, the CIA failed to anticipate the gathering storm despite stray protests that started gaining pace on the streets of Tehran in 1978.

Within one year, everything changed; America had to exit from Iran; the former Soviet Union filled the vacuum in the region by entering into Afghanistan to reach out to warm waters of the Arabian Sea. The Soviet’s decade-long presence in Afghanistan and the eight-year-long war between Iran and Iraq set the tone of future geopolitics in the entire Middle East region. However, communism’s expansionist propensity caused its doom and final breakup in the process. Today’s revolutionary Iran has waded through these monumental developments and survived myriad challenges shaping internal and external dynamics of Iranian politics.

While looking at the past events, on August 19, 1953, the U.S. and British intelligence agencies conspired with elements in the Iranian military to overthrow Iran’s democratically elected prime minister, Mohammed Mossadeq. The coup against Mossadeq, attributed to the nationalization of the Britain-owned Anglo-Persian Oil Company led London to impose an oil embargo on Iran. The coup brought back to power the Western-friendly monarchy, headed by Shah Mohammad Reza Pahlavi. Deeply unpopular among the population, the Shah relied on U.S. support to remain in power until his overthrow in 1979.

Shah was beholden to the American goodwill for survival; under U.S. and U.K. pressure, he signed the Consortium Agreement of 1954, which gave the U.S, British, and French oil companies 40 percent ownership of the nationalized oil industry for twenty-five years. Within the country and in the Gulf Region, Shah emerged as an arbiter which the pro-American Gulf monarchs happily accepted.

Fast forward, in December 1977, President Carter visited Tehran and toasted the Shah for making Iran “an island of stability” and for “the admiration and love which your (Shah’s) people give you.” According to the Washington Post, it was a delusional toast that demonstrated a total lack of understanding of historical legacies and the political fires raging in Iran.

It was a coincidence that just six months before the expiry of the Consortium Agreement of 1954, Shah had to flee the country in a massive revolution under the leadership of Ayatollah Rohullah Khomeini. Thus, the Iranian nation once again became the owner of its oil. But such ownership had its cost. Ever since the revolution, Iran has been under sanctions, negatively impacting the country’s progress and regional stability.

The hostage crisis on November 4 1979 further strained American-Iranian relations for decades. It generated populist mistrust and hatred in both countries and spoiled prospects of rapprochement between the two governments. While the Shah’s Iran had been a reliable U.S. security partner, Khomeini’s Iran became a consistent strategic rival to the United States in diplomatic arenas as diverse as Iraq, Syria, Lebanon, Saudi Arabia and Israel.

During the past four decades, Iran has carved a niche in the geopolitical realm. Using the Shia card has strengthened its position in Iraq, Syria, and Lebanon. The U.S. invasion of Iraq proved to be a blessing in disguise for Iran. Iran tried hard to remove Saddam after the war with Iraq in 1988 but failed. However, President Bush’s hankering to fulfil his father’s legacy of teaching Saddam a lesson turned out to be a substantial strategic success for Iran. With the removal of Saddam, Iran gained immediate access to the power corridor of Iraq and gained uninterrupted land access to Syria and Lebanon. Through Lebanon and Syria, Iran has reached the doors of Israel.

The signing of the nuclear accord entitled Joint Comprehensive Plan of Action (JCPOA) provided the opportunity to Iran and the US to open a new chapter in the bilateral relationship. However, President Trump’s decision to withdraw from the JCPOA in 2018 was a setback not only to multilateralism, but it further dented the credibility of international agreements, especially when a superpower reneged from its commitments. The JCPOA had kindled a glimmer of hope for the paralyzed disarmament machinery, but President Trump’s decision pushed it further towards a total collapse.

For over a year, the talks on the JCPOA have trailed without any results. It is also intriguing that the U.S. now insists inclusion of the Iranian missiles programme and the question of its meddling in the Middle East affairs as part of the JCPOA. Iran maintains that the two issues are beyond the scope of the JCPOA. If Iran has to discuss these issues, it will do so with the region’s states rather than the U.S. Iran questions the locus of the U.S. to be the arbiter of the region. Meanwhile, the European signatories of the JCPOA (UK, France, Germany) are in a quandary because of the American intransigence. These states support the JCPOA, but are helpless to press the U.S. to honour its part of the deal. Meanwhile, the other two signatories, China and Russia, support the Iranian contention that full implementation of JCPOA would be possible if the U.S. rejoins the agreement unconditionally.

Indeed Saudi-led Gulf states and Israel are the major opponents of the JCPOA and see any rapprochement between Iran and the U.S. as detrimental to their interests. Iran’s expansionist tendencies have an anathema for most GCC countries, especially those states with sizeable Shia populations. Unless Iran raises the comfort level of the conservative Arab states, it will face opposition in the region. In a recent interaction with the Iranian scholars and former diplomats, one could discern Iran’s readiness to work with the GCC countries. Through Iraq’s mediation, both Iran and Saudi Arabia are engaged in dialogue, although the pace of these talks is languid.

Iran could break the American embrace, but could not escape the wrath of the superpower—a price the country had to pay to stay afloat. Despite celebrating 43 years of revolution, Iran still feels vulnerable to external interference and “regime change” threats. Concurrently, in a simmering neighbourhood and dangers of Israeli machinations, Iran faces formidable challenges which require deft handling by the revolutionary regime.

Note: This article appeared in Bol News, dated 11 February 2022.
Disclaimer: The views expressed in the article are of the author and do not necessarily represent Institute’s policy. 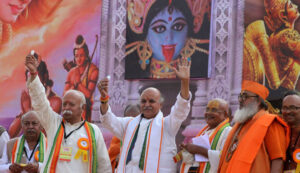 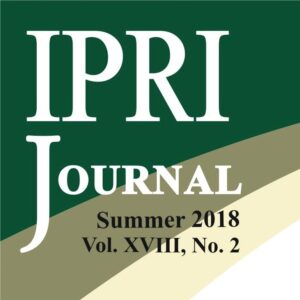 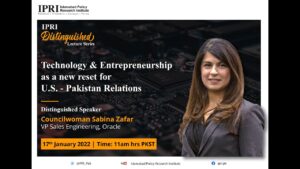 Technology & Entrepreneurship as a new reset for U.S.-Pakistan Relations 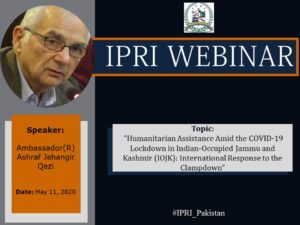