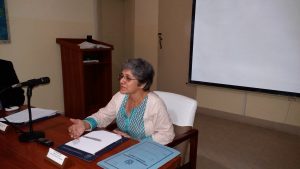 On July 15, 2015, Ms. Robina Ather Ahmed, Additional Secretary-I, Ministry of Commerce Pakistan, gave a presentation on the topic, “Growing India-US trade: Implications for Pakistan” to IPRI scholars. Ms. Robina Ather said that after making a comparison between India’s and Pakistan’s trade with the US respectively, we can conclude that there is an evident growing relationship between India and the US as compared to Pakistan and US relations. Whereas annual trade of India and the US is equal to $ 97 billion US dollors, US and Pakistan’s annual trade volume is only 5.5 billion US dollars.

She said that as compared to Pakistan, India had become a stronger trading partner of the US. Over the last decade, the growth in Pakistan’s exports with the US was 0.9% while India’s trade had increased to 9.9%. Similarly, Pakistan’s growth in imports with the US over the last decade was 1.6% while it was 9.4% in case of India. India is also a major investment partner of the US. While Foreign Direct Investment (FDI) of the US in Pakistan is 218 million, Pakistan’s FDI in the US is 66 million. Whereas, FDI of the US in India is 28 billion, India’s FDI in the US is 5.2 billion. India also has a major trade in services. It is the 5th largest exporter of services to the US.

Explaining the reasons for Pakistan’s lagging behind India in trade with the US, Ms. Ather said that there was a limited export basket. Pakistan is ignorant of demand side and consumer needs. Pakistan has not changed configuration of products exported to the US. In the exports, US share of Pakistan’s Textile sector constitutes 85% of exports, while share of Indian textile exports is only 16%. Pakistan’s top 10 exports to the US are only textile items, while India’s top 10 exports include 9 other sectors as well. The top 10 Pakistani exports are almost the same over last 10 years and have shown no diversification. Moreover, Pakistan’s export products are less competitive in the global market and Pakistan needs to use innovative methods and knowledge based strategy to make its product more competitive by adopting value addition technologies.

In view of above discussion, the growing India-US trade relations have deep implications for Pakistan. While India is emerging as a major trading partner of the US. Pakistan is losing market share there. Through strong trade & investment relations India-US have also developed “vested interests”, and hence the US is giving priority to India than Pakistan in its economic and defence relations in South Asia. Hence, if Pakistan does not improve its competitiveness in the international market, the US will continue to give priority to India.

• There is a need for economic reforms, trade liberalization and trade facilitation. Export promotion should be preferred over import substitution. The supply side constraints need to be addressed and the cost of doing business must be reduced.
• There is a need for improved regional trade to develop efficiency through improved export performance, open market access and improved production capacity.
• Sufficient emphasis be given to economic and trade relations with the US by undertaking effective economic reforms introducing better technologies in the industrial sector.
• More emphasis be given to building economic and commercial public and private partnerships. There should be more interaction, co-operation and trade management between public and private sectors.
• More commercial sectors be included in trade ventures for doing business at home and abroad. More investments and funds be given to trade sector. Tax policies, investment strategies and domestic regulations need to be reformed.
• Pakistan needs to enhance its exports by reforming its trade policies and trade structures. There should be co-ordinated, coherent and export oriented trade policies. The trade impediments can be removed by ministries and by reforming the trade chambers and institutions.
• Skilled, well trained and educated labour force is required for better labour productivity.
• Pakistan should play much active and practical role in SAARC and strengthen its regional trade.

Ms. Ather concluded her presentation by saying that the prospects for the growth of Pakistan’s economy needs more attention. India’s trade with the US is much higher and is expected to rise further in the future. She added that Pakistan should work on strengthening ties with the US, West and other extra-regional countries. In this context, Pakistan needs immediate trade reforms and coherent economic policies to become more competitive in the global economic market and should increase its trade at regional and global level. 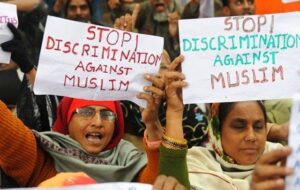 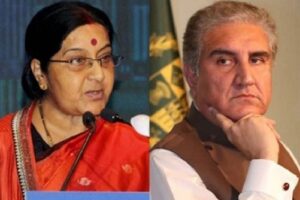