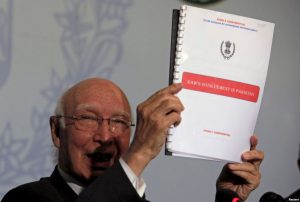 India-Pakistan peace talks have been cancelled. Indian reluctance to include Kashmir in the talks and the “precondition” that the Pakistani side would not consult the Kashmiri leadership were the reasons for the cancellation. Indian Foreign Minister Sushma Swaraj said that India would only discuss terrorism-related issues. India’s logic to avoid discussing Kashmir with Islamabad is absurd. It is not acceptable for Pakistan to exclude Kashmir from the bilateral talks. Meanwhile, terrorism it is a major concern for Pakistan. As stated by National Security Advisor, Sartaj Aziz: “Pakistan is ready to give evidence of RAW’s involvement in terrorism in Pakistan”. This is the second time that the peace talks have been called off, last year in August, the Indo-Pakistan foreign secretaries talks failed to materialize. India’s reliance on a coercive hegemonic doctrine, rather than an institutional one, has led to the failure of bilateral talks one after the other.

India’s image is that of a quarrelling neighbour. India has had confrontation with almost all of the neighbours at some point. It has never been able to establish harmony with the regional states. The brutal acts of suppression committed by the Indian Army in the Indian Held Kashmir (IHK) finds no parallel in modern history since the times of Nazi Germany. Kashmir, one of the loveliest places on earth is being tortured by ruthless terrorism of Indian Security Forces. India and Pakistan have fought wars over Kashmir. Still there is exchange of fire across the Line of Control (LoC). Recently, Indian firing near the Sialkot Working Boundary injured 46 civilians, including 22 women. Kashmir is an internationally recognized issue; there are UN resolutions on Kashmir, which have been deliberately sidelined. In line with the UN ‘Commission on Human Rights’ and ‘Universal Declaration on Human Rights’, human rights violation is an international crime. India cannot close its eyes on the anti-India protests and violations of human rights in Kashmir. The international community’s ignorance over Indian atrocities in IHK, violation across the LoC and Indian support to armed separatists in Balochistan have in a way fortified unjust practices, and have added to the sufferings of humanity. The Indian sponsored insurgency in Sri Lanka is also an example of the bloodiest internal conflicts in South Asia. The violence that followed destroyed Sri-Lanka’s tourism based economy and caused a lot of bloodshed. Sri Lanka fought the Liberation Tigers of Tamil Ealem (LTTE) for nearly three decades. Among the regional states, Pakistan played an important role in restoring peace in Sri Lanka.

India also has a record of violating regional treaties. Regional states, in particular, Bangladesh and Pakistan have voiced concern over India’s violation of Farraka Barrage Treaty and the Indus Water Treaty. India seems to be hugging the Cold War notion that its neighbours are its enemies and need to be put back in place as subordinate states. This Indian psyche is also prevalent on the cultural side. The Indian projection of the ‘Indus Valley Civilization’ as an Indian Saga, is a display of hegemonic cultural onslaught. In actual, the Indus Valley Civilization grew and spread the world entirely from what is now Pakistan.

The lingering political and territorial disputes in South Asia, make the region the least integrated in the world. The regional grouping SAARC’s failure to emerge as unified trading bloc is due to the lack of coherence among the regional states. In the present era of globalization, conflict is not the order of the day rather economic prowess determines the standing of a regional actor in the comity of nations. To move forward, the regional states will have to change their outlook, and cooperative policies of regional connectivity, and energy cooperation would have to be followed. The need is to think from a regional perspective, and together emerge on the world stage as a regional bloc. Therefore, a change in India’s hegemonic way of thinking and realization of the value of institutional cooperation, would revitalize the SAARC and present the region to the world as an attractive trading bloc. The Chinese led ‘Economic Corridor’, linking Gwadar to Kashgar is a huge opportunity for the entire region. India and other countries short of energy could be supplied Liquid Natural Gas (LNG) through Gwadar. 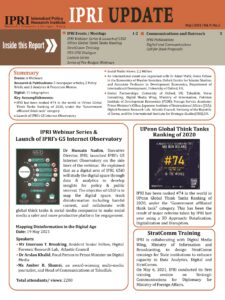 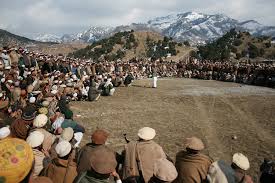