With the rise of Non-traditional Security Threats, the trans-governmental collaboration is becoming the norm. Transnational cooperation is considered as key factor in countering the non-traditional threats such as terrorism, illegal small arms proliferation, cyber intrusions, smuggling and drug trafficking. All these contemporary challenges differ from traditional military ones, though they nonetheless may also pose threats to national security and regional stability. Furthermore, such challenges require widespread and collaborative transnational responses, highlighting the need for cooperation among states in order to find effective coping mechanisms through alternative non-political agencies, such as border security forces, migration department and the environmental protection agencies.

The bilateral and regional cooperation are particularly relevant to South Asia where the border security and management is becoming an important issue. Chief among negative factors that mar Indo-Pak relations is the persistent mistrust. It could be seen in the series of incidents at the LoC since the start of 2013. What happened? Explanations vary. One explanation is that Pakistan-India ties had been usually hostage to the prevailing mood and political environment in both countries. Some experts link the flare-up with Indian domestic politics. This may be one reason, but clearly there are other factors at play. Some of the major factors that generally result in heating up of the LoC include: inadvertent fire/action, violation of existing CBMs (construction of bunkers on the LoC), local issues involving civilians, under political/military direction, media hype/public pressure and personality of commanders posted on LoC.

What so ever has been the reason; these incidents have negatively affected the pace of peace process between the two countries. The LoC encounters of 2013 took the lives of eight Indian and nine Pakistani soldiers besides seven civilians that included one Indian and six Pakistanis. Starting from the LoC in Poonch sector, the firing moved to the working boundary in Sialkot sector. Both the countries blamed each other for violating the decade-old ceasefire. The Prime Ministers of Pakistan and India condemned the flare-up and wished that the issue be resolved through negotiations by the Director General Military Operations (DGMO) of the two countries.

Taking lead Pakistan’s DGMO Major Gen. Aamer Riaz invited his Indian counterpart Lt. Gen. Vinod Bhatia through diplomatic channels for a meeting. The invitation was accepted by the Indian side and the meeting between the two DGMOs was held at Wagah in Pakistan on 24 December 2013. It was the first meeting between the DGMOs in 15 years. Both sides agreed on a number of measures to stabilise the Line of Control (LoC). According to the joint statement issued after the talks both sides agreed: a) to respect the “sanctity” of the ceasefire) to make hotline contact between the two DGMOs more effective and result oriented), c) to inform each other if any innocent civilian inadvertently crosses Line of Control to ensure his or her early return, and d) to hold two Brigade Commander level flag meetings in the near future The talks between the two DGMOs are considered as a positive development in India-Pakistan peace process. The joint statement clearly indicate that both sides are committed in ensuring ceasefire on the LoC by making existing mechanisms more effective and useful. The meeting between the two DGMOs also provided an opportunity to understand each other’s point of views and concerns. For example India raised the issue of infiltration of LoC from Pakistan side. On the issue Pakistan’s response was very clear that it had called for a joint investigation and even suggested the United Nations Military Observer Group in India and Pakistan (UNMOGIP) could be called in. But India did not agree to any mechanism for joint investigation or investigation by a neutral third party such as (UNMOGIP) to find facts about the violent incidents happening at the LoC. Pakistan facilitated and allowed UNMOGIP to visit the LoC where as India did not allow them to visit LoC.

The DGMOs talks were followed by another important five- day meeting between Major General Khan Tahir Javed Khan, Director General of Pakistan Rangers (Punjab) and Mr. Subhash Joshi, Director General, India’s Border Security Force, in Lahore on December 24-26, 2013. The meeting was convened after one and a half years. Normally this is supposed to be a bi-annual meeting.

Besides military CBMs, there is also a need to consolidate political CBMs to stablise ceasefire on the Loc. The progress on CBMs relating to travel and trade across LoC such as Muzaffarabad-Srinagar Bus Service, opening of five crossing points and trade of 21 items should be reviewed. The objective of these CBMs was to create interdependence between the Kashmiris on both sides of the LoC through interactions and trade. Pakistan and India should take steps to ensure smooth trade and travel across the LoC.

Pakistan and India can learn lessons from the two Demilitarized Zones established in conflict areas such as between North and South Korea and a green line between the Greek and Turkish Cyprus. The Korean Demilitarized Zone is a strip of land running across the Korean Peninsula that serves as a buffer zone between North and South Korea. The United Nations Buffer Zone in Cyprus is a demilitarised zone, patrolled by the United Nations Peacekeeping Force in Cyprus (UNFICYP), established in 1974 is known as Green Line. Demilitarization of LoC starting with creation of small demilitarized zone will provide an opportunity to Kashmiris on both sides of the LoC to interact with each other. Siachen can be declared as Peace Park. At times small steps led to big results.

The developments in Pakistan-India relations have given the hope that the interaction between the two countries will improve in 2014 by returning to dialogue on some issues resulting into resumption of total dialogue. Resumption of the dialogue process is the key for peace. CBMs are not solutions but are means to dispute resolutions. The commerce secretaries of India and Pakistan are expected to meet on the sidelines of the SAARC meeting in January 2014.They are expected to talk on measures to improve bilateral trade between India and Pakistan. To make the trade cooperation and other CBMs sustainable there is also a need to discuss the core issues between the two countries including the issue of Kashmir. 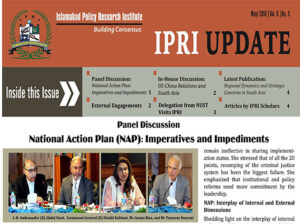