One of the most criminal negligence of our political 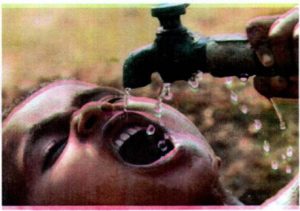 elite is not attending to continuously rising shortage of water in the country. This issue has the potential to turn into an existential threat for the state and its people. In the year 2017, Pakistan has become water scarce country and most dangerous; it is further multiplying with rapid increase in population. The per capita water availability in the US is approximately 6,000 cubic meters, in Australia 5,500 cubic meters, in China 2,200 cubic meters and in Pakistan, the per capita water availability has gone down from 5,260 cubic meter in 1951, to only 908 cubic meter as per last year estimates. International advocated water storage capacity for any nation is 1000 days. The USA can hold water for 900 days and India can store water for its entire population for 220 days. However, water storage capacity of Pakistan is 30 days.

In 1960, IWT treaty was brokered by World Bank between Pakistan and India assigning exclusive rights on the flow of three western rivers of the Indus basin; the Indus, Jhelum, and Chenab (except a small quantity used in Jammu and Kashmir state) to Pakistan, whereas the flow of three eastern rivers: the Ravi, Beas and Sutlej were reserved for India. Now India is hinting to terminate or further decrease water share of Pakistan from three dedicated rivers to Pakistan by 20% unilaterally. According to international law, a treaty like Indus Water can’t be terminated unilaterally; however, it can only be replaced with another treaty. India despite committing gross human violations against Kashmiri youth, blames Pakistan for sponsoring militancy in Kashmir. Mr Narendra Modi threatens to terminate the treaty by saying “blood and water cannot flow together in Kashmir.” Indian diplomacy under BJP has gone over assertive and Pakistan political elite is stuck up in political point scoring. I vividly remember when former Chairman WAPDA, Engr. Shams ul Mulk during the seminar on Hydro-Politics of South Asia had said that to best of his acumen Pakistan hydro policies have been formulated by enemy agents.

Pakistan is heavily dependent on external water resources, approximately 76% [excluding rainfall and earth water]. Pakistan is single basin country with an average annual rainfall of 240mm. Our economy and population are heavily dependent on Indus water, 21% of GOP, 45% of employment and 60% of its exports. Pakistan has moved from water stress country to water scarce country, 5600 cubic meters per person to 908 cubic meter per person in recent years. The level of underground water in the Western Belt Balochistan, KPK and FATA has dropped to an alarming level. These areas of Pakistan were the hub of dry and fresh fruits and production was in abundance. These parts of Balochistan and FATA were dependent on “Karez System” for irrigation purposes which have been destroyed by poor Government policies. Instead of maintenance of Karez, Irrigation department has installed tube wells run on electricity in a close proximity to such Karez.

Resultantly, Karez are dry and slushed with mud 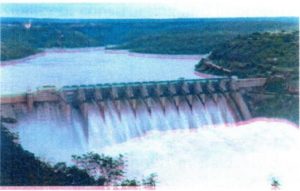 and overpriced electricity is provided for a shorter duration. Hence, agriculture in these areas is fast becoming uneconomical and impracticable. It is a very important sector for a country to invest in for better future. Our neighbour, India is constantly increasing its storage capacity by building large dams and reducing our share of water. Kalabagh dam, a God-gifted site for storage of huge water near Mianwali, fell victim to politics. A propaganda campaign was started to depict that dam would waterlog vast areas of KPK. It was propagated that Nowshera, Kohat and Peshawar would submerge like flood line of 1929. Swabi, Pubhi, Charsada and Mardan would be water logged. It was a propaganda started by oil companies which never wanted to be cut in oil imports and dependence on thermal power generation.

Few ethnic political parties also fuelled this propaganda to cash the sentiments of commoners and easily took political advantage. Later, the issue was picked by our adversaries to harm our core national interests. Indians, on the other hand, have constructed approximately 5000, large dams and plan to construct additional 2500 by 2030 to increase its storage capacity. Global warming is increasing resulting into fast depleting of glaciers in Northern Areas, causing excessive flooding and stress on water resources. Expected water reduction due to the aforesaid phenomenon is 30-40%. Non-construction of water reservoirs, over pumping of water and old system of irrigation, flooding; has also contributed to the shortage of water and further dropped water level in various parts of the country in addition to climatic changes in the region. India under BJP, in particular, will continue to create unrest in the region and IWT would remain prone to political manipulation. India is also instigating Afghanistan to cease its Kabul river water share to Pakistan. Kabul River is contributing 20-25% to Indus water. We need to sign a treaty with Afghanistan also as a lower riparian country. India even hides hydrological data and does not share it with neighbouring countries which ultimately creates distrust in the region and hurt/damage human life and crops at a very large scale.

The issue of shortage of water in Pakistan is urgent and needs immediate attention. It is an important security issue. Political elites need to address it at priority through diplomacy with India and Kabul and by enhancing storage capacity and taking appropriate water preservation measures at home.