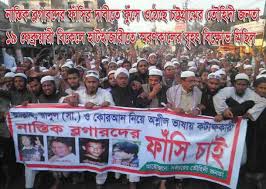 Given the fractured and vindictive political climate in Bangladesh, the risks of new injustices occurring are very real. Dramatic hanging of Abdul Qader Molla symbolises two axioms about gross miscarriage of justice: ‘justice delayed is justice denied’ and justice hurried is justice buried’; both were operative in this case.  Opening of cases after over forty years of the alleged crime, enactment of law by the parliament empowering government to appeal for enhancement of punishment and its retrospect application to Molla’s case, alongside dramatic U-turns by the Bangladeshi Supreme Court with regard to handling of the appeal, followed by hanging of Molla within hours of rejection of appeal speak volumes about the way in which political expediency has overtaken the incumbent Prime Minister of Bangladesh.

Appellate Court carried an upward review of the sentence and life imprisonment was upped to death sentence. This is unprecedented in the legal history of mankind. Later during review proceedings, the Attorney General Alam told the court that there was “no scope for a review in war crimes cases”. Chief Justice Muzammel Hossain promptly obliged and “dismissed” Molla’s appeal for a final review of his death sentence. Only three defence witnesses were allowed to depose against thirty three prosecution witnesses. Moreover, international observers were not allowed to witness the trials. Appellate procedure was mysteriously short and Molla was executed in an indecent haste.

After the creation of Bangladesh, concocted narratives of war crimes were constructed, by the Bangladesh government to malign Pakistan and its Army. Initially Sheik Mujibur Rahman had set up special tribunals to try the ‘collaborators’. Several thousand cases were filed, but good sense prevailed and Sheik Mujibur declared a general amnesty.

Hasina Sheikh’s current tenure as Prime Minister has witnessed recurring demonstrations of personal vendetta. Earlier after 34 years of assassination of Sheikh Mujib, she got his assassins hanged. Khondaker Mushtaq Ahmed, who took over as Bangladesh’s president after Mujib’s assassination, had granted them immunity. General Ziaur Rehman, who later became president, also confirmed the immunity.

Molla’s execution has exposed the hollowness of Bangladesh’s Truth and Reconciliation Committee.  While the founder of the concept of truth and reconciliation, Nelson Mandela, was being paid homage by the world leaders, a mockery of his concept was made in Bangladesh. Mandela’s model certainly sought compassion, understanding and forgiveness, not retribution and settling of personal scores.

In reality, all sides in a conflict resort to violence whenever a country slips into the jaws of a civil war. It is a fact that Bengali militants resorted to whole range of heinous crimes against non-Bengali ethnic groups, especially Biharis, between December 1970 and March 26, 1971; and again after the fall of Dhaka on December 16, 1971. Numerous analysts have challenged the veracity of narratives propped up through official versions of history re-written by the government of Bangladesh. One such challenger is a renowned Bengali scholar from India, Dr Sarmila Bose. In her highly respected work “Dead Reckoning: Memories of the 1971 Bangladesh war” (banned in Bangladesh), Dr Sarmila gives a detailed account of horrific atrocities committed by Bengalis against no-Bengalis.

Indeed soon after moving the first piece of her gimmick, creation of the tribunal, Hasina lost control over its dynamics. The civil society of Bangladesh hijacked ‘the cause’ with fierce staging of pickets in the name of “Shahbagh movement.” Hasina finally fell victim to mob mentality, and got consumed by the Genie she had created. While fermenting and sustaining a politicised hype in favour of trials, she ignored that equally powerful counter narrative to Shahbagh movement existed in parallel. If any proof of this clash of values were needed, it came in the form of a hugely impressive counter-demonstration against the Shahbagh movement led by activists of Islamic movement Hifazat-e-Islam, which occupied the capital’s Motijheel area. Unlike the Shahbagh events, the counter-demonstration was well-planned and organized, and conveyed the stark message that there was an alternative point of view in the overwhelmingly Muslim country.

Molla’s execution was carried out in a run-up to December 16 ‘Victory Day’, to serve as a diversionary tool to shift the public focus from deep political crisis through which this unfortunate country is passing. Opposition parties have refused to take part in the forthcoming elections unless an independent interim government is put in place for conducting free, fair and credible elections. The sole objective of Hasina’s populist ploy was to preempt the building of a grand alliance of multiple political parties against the Awami League with active participation of the JI cadres. All six convicts sentenced for alleged war crimes belong to the Bangladesh Jamaat-i-Islami (JI) and other parties currently aligned with the opposition Bangladesh Nationalist Party (BN).The people are out in the streets of Bangladesh and there are reports of violent demonstrations in all districts. The mood is ugly the Victory Day could turn into a death dance. The matters could eventually end up in another military takeover.

From Pakistan three streams of reaction have emerged. JI Pakistan has owned its leader, declared his actions during the 1971 war as legitimate and patriotic and has resorted to peaceful demonstration and was instrumental in adoption of a resolution in the National Assembly for accruing a unanimous condemnation.  Interior Minister Chaudhry Nisar Ali Khan has expressed deep grief and concern over the hanging of Mullah, calling it a judicial murder. He said there was no doubt the JI leader was punished for his loyalty to Pakistan in 1971. “The execution of Abdul Quader Molla is a very unfortunate and tragic step… [Molla] remained a supporter of a united Pakistan till the very end…today every Pakistani is saddened and grieved over his death.” He said it would have been better if the Bangladeshi government had shown farsightedness, large heartedness and magnanimity instead of opening old wounds. These sentiments are indeed representative of national pulse. Foreign office’s response was overly cautious: “While it is not Pakistan’s policy to interfere in the affairs of any country, we have noted the concerns raised by the international community and human rights organisations on the way the recent trials have been conducted which have added to the current instability in Bangladesh, we wish the brotherly people of Bangladesh well and hope that spirit of reconciliation and an atmosphere, free of violence, will prevail.” It is a point to ponder for our Foreign office that Pakistan had to abandon the practice of hanging even the hardened terrorists to extract nominal concessions for textile exports to European Union countries whereas Bangladesh has been enjoying far better facilities for the same kind of exports since decades, and yet was able to hang Molla with impunity. The sham trials have been unanimously criticised by the international community for failing well short of acceptable standards of justice. Since its institution in 2010, the International Tribunal Court (ICT) has attracted world-wide condemnation. The court’s standing received a severe blow when Mohammed Nizamul Huq resigned as chairman of the tribunal. Nizamul left the post after being questioned by “The Economist” and having private emails published in Bangladesh that cast doubt on the integrity of the tribunal.

Since independence in 1971, people of Bangladesh are unable to find psychological or emotional “closure” on the violent birth of their country. Pakistan had tendered regrets for all the excesses that might have been committed, as documented in tripartite agreement signed on April 09, 1974. Agreement reads: “The Minister of State for Defence and Foreign Affairs of the Government of Pakistan said that his Government condemned and deeply regretted any crimes that may have been committed”.  It further stated that: “In the light of the foregoing and, in particular, having regard to the appeal of the Prime Minister of Pakistan to the people of Bangladesh to forgive and forget the mistakes of the past, the Foreign Minister of Bangladesh stated that the Government of Bangladesh had decided not to proceed with the trials as an act of clemency”. Later, President Pervez Musharraf, while visiting Bangladesh in 2002, once again expressed regrets for the ‘1971 events’ during the war. However as a political expediency Bangladesh has been rekindling the issue on as required basis.

Norms of international relations, solidarity of Islamic Ummah and wisdom demanded that such events of the past should have been put behind for the beginning of a new era. If Awami League’s sole interest was accounting for the actions of everyone in 1971 it would have been better served by granting an amnesty to anyone who was convicted while seeking only to establish the truth.

{A variant of this article was carried  by the Nation on December 16, 2013, under the caption: “Divisive Politics of Bangladesh”}. 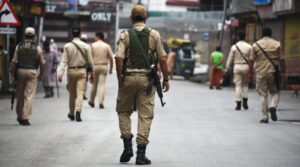