Central Asia is a veritable heart of Asia and a cradle of civilisations that inspired many a civilisation in Eurasia and beyond. Ellsworth Huntington said, “the evidence points to Central Asia as man’s original home, for the general movement of human migrations has been outward from that region and not inward.” The panegyrics to the glory of those fabled empires including Bactrian, Achaemenid, Greek, Huns, Scythians, Kushans, Oghuz Turks, Mongols, and Timurids have been sung by poets and historians for centuries. Central Asia was historically connected with South Asia through Afghanistan as the strategic connector. The fabled cities on the Silk route like Samarqand, Balkh, and Taxila led a strand of the Silk route to Multan and Thatta blazing a trail of prosperity. During the Kushan Empire’s period (78 AD to 375 AD) Central and South Asia were linked through Afghanistan with the Termez region as the summer capital and Purshupura (present-day Peshawar) as the winter capital of the Kushan Empire.

Central Asia was cut off from South Asia because of the 70 years of Soviet rule and subsequent turmoil in Afghanistan. The seventy years of Soviet rule left a deep imprint on central Asian states’ political, economic, and even cultural life. However, the historical, religious, cultural, and geographical connections have nudged the Central Asian states close to each other. Linguistic and historical ties coupled with economic incentives create a perfect incentive for trade, commerce, and tourism to Central Asia.

The withdrawal of foreign forces from Afghanistan offers a good opportunity to pursue trade and infrastructural connectivity between South Asia and Central Asia. For Central Asian states, the land connection through roads and railways with Pakistan and other South Asian states offer a great opportunity to break the landlocked barriers and diversify trade routes. With Pakistan and Russia’s relationship on an upward trajectory, the prospects of Russian trade goods finding their way through central Asia to the Pakistani ports of Karachi and Gwadar are becoming a realisable goal.

Recently, an international conference on Security and Economic Development in Afghanistan was held in Tashkent wherein Chinese and Uzbek officials made positive claims about the prospects of trade and commerce in the region. The President of Uzbekistan expressed hope for peace and stability in Afghanistan, which the entire international community must support. He warned against the isolation of Afghanistan, which portends a grave humanitarian crisis. He also urged the international community to “create real prerequisites” for a peaceful, stable, and prosperous Afghanistan. He mentioned Uzbekistan’s tangible contribution to the socio-economic and humanitarian recovery of Afghanistan including the development of mega trans-regional infrastructure projects.

One such game-changing project is the Trans Afghan Railway project, which would link Termez with Jalalabad and Peshawar. Both Pakistani and Afghan governments are eager about the $5 billion project. The Chinese special representative on Afghanistan also evinced interest in the project stating that China supports the linkage of the China-Pakistan Economic Corridor with Central Asia, which was encouraging to hear.

The 573 kilometres railway project will link Uzbekistan, Afghanistan and Pakistan and would act as a strategic artery taking goods from South Asia to as far as Russia and bringing central Asian goods to Arabian sea ports through Pakistan. If India foregoes its isolationist stance and joins the project, the Trans Afghan railway corridor can achieve its optimal potential.

The economic viability of the Trans Afghan railway line is evident through a comparison of the transportation cost. A container for shipment from Uzbekistan through Afghanistan and Iran costs approximately $4,000 per container. Whereas a similar container through Pakistani ports would cost $2,000 per container. The corridor will also be time efficient, which will further increase its commercial attraction. It has the potential of becoming a multipurpose corridor of prosperity as power transmission and telecommunication lines have also been planned along the corridor. In a way, the collective force of centuries-old cultural, religious, and economic linkages is reverting to the old Silk Route.

The time has come to improve connectivity between South and Central Asia and Eurasia. Countries whose perceived interests do not coincide with the Trans Afghan-Pakistan corridor will act as an obstacle. Iran is keen on a similar trade corridor towards its Chahbahar port. India is not very warm to the idea because of its anti-China stance and an aversion to trade connectivity with Pakistan. However, gas-rich Turkmenistan, energy-rich Tajikistan and Kyrgyzstan promise that the Turkmenistan–Afghanistan–Pakistan–India Pipeline and Central Asia-South Asia power project (CASA-1000) will transform the energy situation of South Asia including India. Therefore, the wise course is to avoid adversarial attitude and pursue bloc politics to embrace the new paradigm of geo-economics.

The security situation in Afghanistan can impede the aforementioned projects. However, the Tashkent Conference on Security and Economic development was a timely initiative to resolve the security and economic issues of Afghanistan. During the conference, the US representative Tom West, the United Nations, European Union, and UK representatives highlighted usual concerns of women’s rights, inclusive governance, arbitrary detentions, and the need for financial checks including the replacement of commanders with finance experts in Afghan Central Bank. The Chinese and the Russian representatives strongly supported unfreezing Afghan assets of $7 billion. They also coaxed the Taliban government to counter terrorist activities of the East Turkestan Islamic Movement (ETIM), Al Qaeda and IS-K. Both regional and international communities displayed a positive attitude toward addressing the security and economic situation of Afghanistan. This signals potential stability in the region, which is a prerequisite for all connectivity initiatives.

Note: This article appeared in Tribune, dated 06 August 2022.
Disclaimer: The views expressed in the article are of the author and do not necessarily represent Institute’s policy. 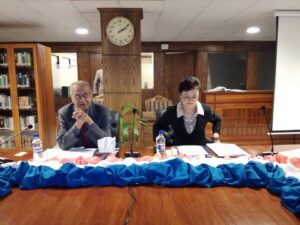 Visit of The CICIR Delegation to IPRI