Like Pakistan’s elections in 2013, high voter turnout is also the feature of ongoing elections in India and Afghanistan. It will be interesting to see how these heavily mandated governments perform in the field of regional stability. Both these countries constitute Pakistan’s troubled neighbourhood; and who-so-ever in on the helm of affairs would determine the future course of Pakistan’s bilateral relations with these countries. Political baggage limits the space available to diplomats and historic baggage limits the extent of initiatives which the political leadership of the three countries could safely take. As of now, Narendra Modi and Dr Abdullah Abdullah are poised to lead their respective countries; both are known for their comparatively stiff attitude towards Pakistan. Abdullah’s tilt towards India is a common knowledge. Like anchorperson Hamid Mir, both Naredra Modi and Abdullah Adbullah are pathologically predisposed to blame on ISI what does or does not happen in their respective countries.

The foreign policy section of the BJP manifesto attempts to be inspiring by talking of “Shreshtha Bharat” (Great India) and positing an India that works towards commanding rather than demanding its rightful place in the comity of nations and a place at the high table of global governance. 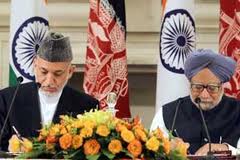 This is in contrast to the Congress’ manifesto which does not espouse such aspirations and continues with its focus on entitlements as the only remedy. It would have been more credible for the BJP to spell out the principal drivers and strategy for achieving Shreshtha Bharat. Modi has raised the country’s expectations sky-high on this count — if he attempt to deliver on foreign policy related electoral promises, then there would certainly be regional turbulences.

A second innovation in the BJP manifesto is the idea of crafting a “web of alliances” to boost India’s weight on the global stage. It stands in contrast to Congress’s obsession with the traditional conception of non-alignment. However, BJP seems to share the Congress’s aversion to alliances with big powers like the United States. In fact, neither party mentions relations with the US. The Congress talks about improving relations with all major powers and the BJP says Indian foreign policy will not be led by the big powers. As regards alliances with middle powers and smaller states, Delhi had already established treaty-based alliances with its smaller Himalayan neighbours and defence cooperation with middle powers like Indonesia and Egypt in the Nehru era. More recently, India has signed strategic partnerships with a number of countries in the extended neighbourhood, including Afghanistan. Building a web of Indian alliances in Africa, Asia and the Indian Ocean is a big idea on which India has been working since long.

A third important element, a strategic conception of the subcontinent finds some expression in the Congress manifesto, which says deeper economic engagement with the neighbours is “critical for realizing the true potential of the region”. The BJP criticizes the Congress for its recent drift in relations with the neighbours, but offers little more than the assertion that it will “pursue friendly relations” with all neighbours. BJP’s emphasis is on projecting a muscular regional policy: “where required we will not hesitate from taking strong stand and steps”. However, bravado is not a substitute for a comprehensive neighbourhood strategy. The manifesto has revealed the BJP’s lack of a grand strategy for the region. This vagueness would offer Modi considerable freedom—oscillating between pragmatism and jingoism. Modi would have sufficient authority in the BJP to set his own strategic priorities. However, his success on the diplomatic front will depend on an emulation of Atal Bihari Vajpayee, who successfully carved out foreign policy autonomy from his party’s primitive world view.

While delivering a recent talk at Jamia Millia Islamia University on Pakistan’s foreign policy, Pakistan’s High Commissioner to India, Mr Abdul Basit, said that Indo-Pak ties are “too much into negativity” and it was incumbent upon the leaderships in India and Pakistan to create a peaceful environment in the region for resolution of problems that had bedeviled the relationship between the neighbours.

He advocated resolution of Kashmir issue: “You can always call it (Jammu and Kashmir) integral part of India but it is the distance between our two countries and also one of the components of composite dialogue. So it is important whether we resolve it in Shimla agreement or through mediation but we need to resolve the issue according to the aspirations to the people of Jammu and Kashmir.” He emphasized that both India and Pakistan should not take the dialogue process as a “favour by one to another” and called for a sustained comprehensive dialogue process which need not reinvent the wheel.

The race to succeed President Karzai has narrowed to a two-way fight between Ashraf Ghani and Dr Abdullah Abdullah. Ashraf Ghani seeks rapprochement with Pakistan, along the lines of France and Germany after World War II. He wants to end years of suspicion and mistrust with Pakistan and forge a “special relationship” with the nuclear power. Abdullah is a seasoned political operator. As foreign minister under Karzai he was known for his stiff articulations about Pakistan and was generally perceived as a pro-India guy. However, over a period of time, he has mellowed down and balanced his approach. To outside observers, there appears to be little to differentiate between Ghani and Abdullah’s policies. Both want to sign a security pact with the United States, desire reconciliation with the Taliban and look forward to constitutional changes that will create more leadership positions.

Replying to a question about Dr Abdullah’s likelihood of succeeding President Karzai, his image as anti-Pakistan and a background of very cordial relations with India, Pakistan’s MOFA spokesperson commented: “It is for the people of Afghanistan to decide who will come into power in Afghanistan. We have said that we are not supporting one party or the other…whoever forms the government, irrespective of that, Pakistan would focus on building and enhancing our bilateral relations with Afghanistan…I would not agree with the perception that any particular Afghan leader is against Pakistan. We engage with them all”.

Apparently Pakistan is poised to deal with a more difficult neighbourhood. However, there is no likelihood of any strategic upset, tactical irritants would demand more attention from day-today handlers of Pakistan’s relationship with neighbouring countries. Three countries are poised to face formidable challenges while managing their bilateral interactions within the trio.

These days, diplomatic circles in Delhi are abuzz with rumors that India-Iran-Afghanistan and Israel’s secret agencies have chalked out a strategy to defame Pakistan at international level by portraying Pakistan as epicenter of terrorism. According to the reports, CIA’s involvement is also being hinted upon. Even though Iran’s participation in such an activity is a farfetched possibility, however Pak-Iran relations are certainly on a down slide.

Given the likely make-up of emerging political leadership in the two neighbouring counties and continuous erosion of credibility between Pakistan and Iran, Prime Minister Nawaz Sharif’s vision of peaceful neighbourhood may not be easy to achieve in short term. While this may stay as long term objective, Pakistan should prepare itself to handle an irritant neighbourhood, sporadically touching—but not breaching—the boundary of hostility. Friendly neighbourhood may appear an innocent and noble foreign policy objective; yet it may not be possible to achieve it at least in short to medium timeframe. It would be more appropriate for Pakistan to realistically lower the objective to achieving “non-hostile neighbourhood”.